The energy and excitement in the air at the weekend was so thick you could almost taste it.

Fleetwood Mac's two New Plymouth concerts spun the city into a fever with 25,000 out of town fans hitting the streets to shop, eat and see the sights.

On Saturday the rain held off for most of the day as the sidewalks of the CBD remained five people deep and left every cafe and bar without an empty seat.

It was middle-aged mania with married duos taking over the streets complete with matching outfits to keep the elements away.

On both Saturday and Sunday the Bach on Breakwater Wine Bar had people queuing half an hour before they opened.

"I told my staff to sit down and have breakfast because they wouldn't get another shot at it," owner Barbara Olsen-Henderson said.

"We had queues out the door all day both days but everyone was really good and patient and it has been a wonderful weekend."

Local art gallery and gift shop Verge was packed with people all weekend.

A spokesperson for the shop said it had been full to the brim all weekend with visitors to Taranaki buying for Christmas and personal treats.

"We just got slammed from 8am each morning," Mr van Praagh explained.

"It was full before and after the concert, there is no rest for the wicked."

There was only one hitch, a phase on Devon St East blew and knocked out half of Crowded House's power from 8pm on Saturday night until yesterday morning.

"It was a pain but it didn't stop everybody from having a good time," said Mr van Praagh, who also co-owns Stumble Inn in Merrilands and Butlers Reef in Oakura.

Although run off his feet, he did get to the concert himself on Saturday night. "It was awesome, well worth the ticket and the Bowl just looked great. Lindsey Buckingham on the guitar was just a machine. It was just an awesome weekend." He said both the Stumble Inn and Butlers Reef were packed full of people all weekend.

Several other bars and pubs took advantage of the big visitor numbers by taking out special liquor licences for last night.

And after the shows concert-goers filled the CBD but despite the influx police said people were pretty well behaved.

Mick Fleetwood spoke for 36,000 fans and the city of New Plymouth when he said goodbye for the 83rd time on the final concert of their 10-month Unleashed tour last night.

However, guitarist and singer Lindsey Buckingham hinted there was more to come.

"New Zealand, thank you so much for making our last show so great. We absolutely loved it. You were an absolute pleasure. We will see you next time," he said.

However, when next time will be was left hanging.

Whether they come back or not, the supergroup has left everyone satisfied for now. 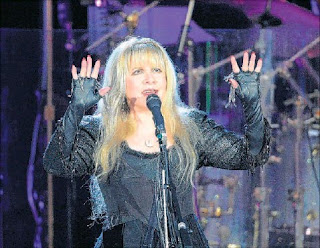 Fleetwood Mac could not put a foot wrong during their two concerts at New Plymouth's picturesque Bowl of Brooklands on Saturday and last night.

Hardly a shower touched last night's crowd at the Bowl for the second concert by the much-loved supergroup.

By comparison Saturday's fans got soaked, but neither group would have traded places for the world.

Wet and dry, fans revelled in being so close to the music heard in so many of their memories.

From the first song Monday Morning those who hoped to sit through the concert realised it was hopeless. 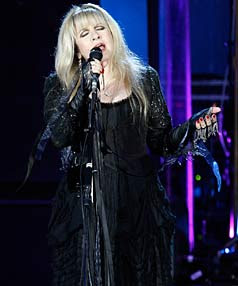 As a mass the crowd rose and for the next 2 1/2-hours bounced, swayed and cheered with the energy pouring from the stage.

Between the big hits like Gypsy, Rhiannon and Landslide guitarist Lindsey Buckingham and singer Steve Nicks reflected on their own successes, excesses and the relationships that kept the band gravitating towards each other through all the turmoil.

"Something you will notice is we take breaks, sometimes long breaks," said Buckingham, in reference to the on-again off-again relationship the band members share.

"But each time we come back it's something different."

Although not so different their fans didn't drift into a pleasant fog of nostalgia. For the many baby-boomers it was a chance to relive their 20s and dust-off the dance moves that still embarrass their offspring, who themselves knew the music from their childhood.

For everyone in between, the songs were soundtracks to memories they would never forget.

Sue Greenville of Te Aroha proudly declared the group her favourite of all time.

The fact the voices of Nicks and Buckingham lacked the raw power of old was never going to detract from her experience.

"It was absolutely fantastic. I knew every single one of the songs and loved every minute of it. It was really, really cool," she said.

The concert was her first time at the Bowl of Brooklands and if Fleetwood Mac came back, as Mick Fleetwood hinted they might do, so would she.

And from the rumbling cheers the opening bars of each song were met with, it is unlikely she would be alone.

Although their 10-month world tour finished last night, from the way all the individual group members revelled in the experience it is unlikely the band members will go their separate ways.

Early in the set Buckingham spoke of how much they were enjoying the tour.

"There is none of the pressure of promoting a new album because there is no new album to promote. Yet," he said.

That they were having fun was plain to see, even from the very back of the Bowl where the on-stage antics were best watched on the two large video screens on each side of the stage.

Fleetwood's energetic drumming and vast array of facial expressions were beaten in enthusiasm only by Buckingham's near crazed strutting guitar solos which belied his age and expected hip strength.

For many it was Nicks who stole the show with her many changes of costume, her high heeled prancing and otherworldly dance style.

Despite the Bowl hosting one of the biggest crowds ever, there was little trouble to speak of.

That gig was the first of two the supergroup played at the TSB Bowl of Brooklands in New Plymouth at the weekend.

More than 36,000 people attended the concerts and all walked away with the memory of an energetic band still full of melodic power after more then 40 years in the business.

Fleetwood Mac promoter Andrew McManus said the whole band was more than impressed with the venue and the crowd's enthusiasm.

"Stevie [Nicks] knew the venue from playing last time and when I spoke to the band after the show they were just glowing."

He said he received a text message from Buckingham yesterday morning which said it all.

And the persistent rain during Saturday's show did little to put the band off. In fact, they said it added to act. During the short time Fleetwood Mac was in New Plymouth Mick Fleetwood took his family out and about while Nicks took the day to rest, Mr McManus said.

"Stevie is a professional, she always says `I've got an instrument which 17,000 people are paying to hear and I need to protect it'. So she rests in her suite and doesn't talk."

As for rumours this is Fleetwood Mac's final world tour it won't be if Mr McManus has anything to do with it.

He said Buckingham was writing new material and another album, coupled with another world tour, could be in the works. "And if they do tour and New Plymouth is not on the itinerary then I will be having a serious talk with them," Mr McManus laughed. "Mick and John [McVie] just love touring, they love being on the road and Mick has just been nominated for a Grammy in the jazz section.

"Stevie is the key and I would love to think they could all work together again and be on the road in two or three years.

"This is the third show I have brought to New Plymouth and the venue is just world-class," he said.

"It is the ambience and the acoustics that make it work. We have played a lot of bowl venues where the acoustics just swirl around. It's amazing really."

He says the success of the Fleetwood Mac shows has opened the floodgates for other promoters to bring artists to New Plymouth.

"The band's enjoyment is important and at the bowl all the boxes were ticked."