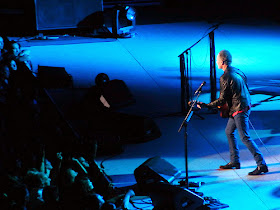 I’ll admit that I was expecting the Fleetwood Mac concert to be a pleasant exercise in nostalgia and the
opportunity to hear a few good (even great) old songs played competently by a band that was just on the positive side of going through the motions. I thought that there would be a few memories bought back and a slightly uncomfortable feeling that perhaps I’d be a willing participant in a session of dead horse flogging.

It’s not that I hadn’t been long time fan. I had begged my Mum to let me go the their Calder Park Rockarena concert in the 70’s (to no avail), I’d bought Rumours and the self titled album and Tusk and even a couple of vinyl bootleg albums. I’d had a schoolboy crush on Stevie Nicks and played Belladonna until the needle had worn through the vinyl.

But somehow through the passage of time and discovery of other music I’d kind of lost perspective on the band and their music. I’d consigned them to the ranks of Gold FM staples, and neglected the numerous strong album tracks and become blasé and a bit numbed to the impact of the half dozen songs that you hear frequently in the ether.

The line up changes, the half baked comeback albums and the saturation of personality based “colour” pieces in magazines had tarnished my memory of the band.

All that combined to cause me to seriously under-estimate this concert.

Last night they rehabilitated themselves totally in my eyes. (although I hesitate to say “rehabilitated” when talking about Fleetwood Mac!)

The first inkling that we were in for something special came with the first song Monday Morning. I’d almost forgotten that this song existed and it was a uplifting way to start the show. It lead into The Chain – surely a statement of intent for the band, then and now – and as the song built and Lindsey Buckingham’s guitar grew in intensity I started to remember just how much depth they had in their repertoire.

The start of the show wasn’t flawless. On Dreams the vocals of Nicks and Buckingham just didn’t seem to blend and I momentarily thought that the concert might struggle to reach great heights.

A couple of songs later Stevie told the story of how she had met Lindsey and how they came to be in a (pre Fleetwood Mac) band together. While the reason for the story was to introduce Gypsy it served a higher purpose as well. It immediately became apparent that the unspoken theme of the night was a celebration of the Nicks/Buckingham relationship. There was so much love and affection on display between the two it could have been horribly annoying but the sincerity was such that the audience were completely in tune with them.

In a way the concert was a very public act of acceptance, of understanding and reconciliation by two people who have realised that the emotional agonies of the past were just too far gone now to matter any more.

Buckingham’s solo song Go Insane was a welcome inclusion before Stevie performed her signature song Rhiannon. To be completely honest it was a dogs breakfast with her phrasing and the harmonies all over the place but it hardly mattered.

However the concert totally kicked into gear with Second Hand News. This is an under-rated song in the Fleetwood Mac songbook and when it gave way to Tusk the concert was up and away.

Sara gave us the magical and not at all cheesy Stevie/Lindsey ’moment’ but it was the next song Big Love that was the eye popper. Buckingham explained that the song was an important one to the evolution of his music and then proceeded to play some rock guitar that would have him ranked with the gods of the instrument.

Somewhere along the way I realised that I’d also under-rated Lindsey Buckingham. Perhaps its because he was only ever one of three lead singers in Fleetwood Mac, perhaps its because the band bore the names of Fleetwood and McVie, perhaps its due to the commercial solo success and media infatuation with Stevie or perhaps because he chose to leave the band for a lengthy period. Whatever the reason Buckingham has not received the credit due.

On the evidence of his performance last night he is one of the great artists of contemporary rock music. He’s a staggeringly good guitarist who plays with passion and integrity. He’s a great singer and he works tirelessly to deliver a performance that could never be described as perfunctory. His guitar playing in I’m So Afraid was Neil Young level mid-blowing. This was so far away from “easy-listening” it wasn’t funny!

Stevie best vocal for the night came on Landslide which she delivered beautifully and she did a good job with her other signature song Gold Dust Woman.

As the concert drew to a close with the obvious big finish of Go Your Own Way they had well and truly exceeded expectations.

While John McVie is rock solid and Mick Fleetwood remains a really good and fluid drummer (and a utterly loveable personality, in a crazy uncle kinda way), there’s no doubting that this is a show where Lindsey Buckingham’s star is in the absolute prime position.

This show was almost identical to the setlist from right across the tour and lets not kid ourselves that we got any special treatment. It’s quite probably that even the spontaneous moments were well rehearsed, or at least were well tested. But even allowing for this there was a real joy and commitment in the performance that had me believing all over again.

You cant possibly ask more than that.