Fleetwood Mac had fans in raptures at two sold out shows in New Plymouth over the weekend. Reviewer Simon Sweetman was there.

From late-60s British blues band to mid-70s American soft-rock superstars, Fleetwood Mac have evolved and endured, the sound almost taking a back seat to the soap-opera antics of the band members.

Inter-band relationships and affairs, along with drug and alcohol abuse, have, somewhat ironically, been the glue for this band, providing material for many of the classic songs.

This version of the Mac features original rhythm section John McVie (bass) and Mick Fleetwood (drums). Out front are Lindsey Buckingham and Stevie Nicks, the singer-songwriters who in the mid-70s took the band to the top of the charts and helped in creating one of the greatest-selling albums of all time, Rumours.

Christine McVie declines the invites to tour the hits these days. Her songs Don't Stop and Say You Love Me were played here, however.

The band began with the lively burst of pop that is Monday Morning, the opening track from the eponymous 1975 album. The audience stood strong as the rain came in, and were treated to The Chain and Dreams, an early one-two punch.

Buckingham owned the stage, stalking with his guitar, low-slung, crouching, peeling off piercing runs of notes, squalling solos that enthralled.

If he was occasionally too intense with his between-song banter detailing the emotional connections – something lost on parts of the audience, there to drink first and listen to the six radio hits they knew – then he certainly saved face with his powerhouse solo acoustic take on Big Love, transformed from the Tango in the Night version.

By the time the set-closing anthem Go Your Own Way was ringing out, Buckingham was receiving healthy ovations for every guitar solo.

Nicks, ever the beguiling performer, manages, still, to very much become the song she is singing – to morph into a character that embodies the white witch of Rhiannon; that is the "poet in my heart" of Sara; that is the Gypsy. 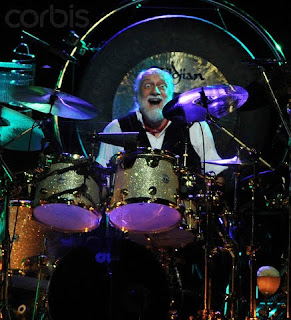 Her tour-de-force moments were Gold Dust Woman and the final encore, Silver Springs. An always tender moment in a Fleetwood Mac show is when Nicks sings Landslide; the emotional journey that she and Buckingham have provided for generations of listeners and for themselves seems to be summed up in the lyric.

John McVie was the quiet rock, as ever, pushing the songs forward with his bass playing, receiving huge applause for the exploratory line that propels The Chain, the concert's first of many truly awesome moments.

And Fleetwood, a towering presence behind the kit, got to show off a touch of his possible madness as he chanted near-gibberish around a drum solo at the end of World Turning.

Fleetwood Mac: The Good, the Bad & the Ugly
by: Simon Sweetman
Stuff.co.uk


While the big stars, Mick Fleetwood, Stevie Nicks, Lindsey Buckingham and John McVie, jumped into the flash cars, the lesser members of the entourage filled the Toyotas

It's an amazing story, or set of stories.

On the drive back - yesterday afternoon - we chatted about some of the stories connecting the band; about the Peter Green years and then on to the involvement of Bob Welch and then the "classic lineup". I even have time for the album they recorded called Time.

But I do not have a lot of time for idiots in crowds. And I was reminded of why I hate open-air concerts in New Zealand.

The venue, oversold from what I could tell, was stripped of its unique selling-point: the pond in front of the stage was crudely/cruelly boarded over with a platform to house some seats so that people can be packed in (can anyone say Concert Cave Creek?) There was also a couple of eyesore mini-grandstands jutting out like the back-ends of a bogan mullet, flanking the front of the stage, rendering large patches of the banks useless.

You either queue up early - or you fight for your patch of land. If you do get there early you have people push in and end up on your turf anyway.

All of this should be okay - not ideal but okay - but in among the picnic baskets and recyclable bags filled with cushions and blankets, people forget to pack any sense of humility. And to save on space most tend to not bother taking along any dignity.

I will never, as a music fan, understand how people can choose to spend $120 on a ticket and stand there talking, hooting, laughing, being annoying until the three or four radio megahits are played. And I will also never understand why people pay so much money to go to these shows - including petrol or flights and accommodation as well as ridiculous booze prices - to get written off and not really remember anything but the obvious songs.

I didn't want Fleetwood Mac to play Don't Stop. I don't need to hear that song ever again.

Stumbling and tumbling around the crowd of apparently 18,000 people (according to this) were, presumably, no fewer than 987 women between the ages of 35 and 17 named Rhiannon - just waiting for the moment to yell "this is MY song"; their mothers there too, hoping for Landslide for the chance to yell "this song is about MY life" and far too many females dressed in leather and lace - with only the lace being removable - unaware that Gypsy is anything other than a Fleetwood Mac song (one of the ones to singalong to) and that Cougar is a type of pre-mixed bourbon-drink.

Before you write in calling me a killjoy, I am all for people having a good time. I think it's great to be part of a crowd that is having a good time - I enjoyed Don't Stop more than I thought I would on Saturday night because all around me people were partying, wrapped up in a song that everyone knew.

It's the aggression and agitation I cannot stand. That - and the absolute idiocy.

This was similar to any of the shows I have reviewed at Hawke's Bay's Mission vineyard. A place where they could put a guy on stage with a lawnmower and you would still have a paying audience pouring in with chilli-bins. "Mow another strip Trev; classic! Absolutely classic!"

But we should not have to rub elbows with them on the way in and out of a poorly designed park in a mad rush.

The venue takes a hammering with cans and bottles being biffed; food and rubbish everywhere. People are rewarded for hooligan behaviour because articles are written saying the show was well supported; the city will apparently benefit from the cash injection/s. It reduces good music to the base level of being background drinking sounds for The Brains Trust.

It's insulting - to the real fans and to the band.

It rained the whole way through the concert - that cannot be helped. It made me wonder, though, if the people behaved worse because of it, or should I have been relieved? Maybe if it was a sunny day there would have been more drunken goons with no idea, no taste and no real business being there.

I vowed, as I spent 45 minutes in a near standstill trying to leave what had been an amazing musical performance, that I would never go to an outdoor show at a vineyard or natural amphitheatre ever again. Of course it's not true - it's an occupational hazard that I will have to (continue to) endure. But I'm getting close to picking the venue as being almost as important as the act. I will probably always make exceptions - I really wanted to see FlDrunken Boganseetwood Mac and it was worth it to me to travel there, pay to stay, pay for tickets - but if I can help it I will be sticking to seated stadium shows and indoor events.

People are idiots. And it's a shame.

What do you reckon? Over the top? Or do you agree? Have you had gigs ruined for you by drunken jerks? Or do you think that if you pay the money you get to, within reason, do what you want?

And were you at Fleetwood Mac this weekend? What did you think? Did the rain dampen your spirits? Or could nothing stop the Mac attack? Or were you disappointed by the music? Maybe they only played Rhiannon and Don't Stop once each and that bugged you? (I heard someone yell "play Rhiannon again!")

What are your thoughts on this weekend's Mac show? And/or on outdoor shows in general? Do our crowds embarrass themselves? Or am I barking up the wrong tree?