It’s not often you see an arena jam-packed with both Baby Boomers and Gen Y kids pumping their fists in the air in adoration of a shared rock idol – but that’s exactly what happened last weekend when seventies rock legends Fleetwood Mac swept into Perth on their Unleashed tour and dazzled legions of fans at Members Equity Stadium. 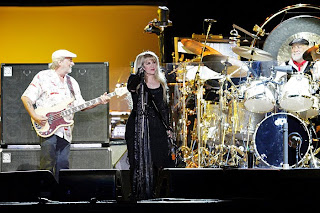 A curious melange of punters poured into the stadium as the sun began to set: middle-aged hippies, parents and their kids, raucous bogans and hip twenty-somethings.

Once night fell, the speakers crackled to life with a crescendoing electric fuzz – it sounded like a locust plague was about to descend on the stadium – before the stage exploded with light and a chugging guitar riff launched proceedings with the band’s 1975 hit, Monday Morning.

The crowd was in almost silent awe as their idols appeared before them in the flesh. Guitarist Lindsay Buckingham bounced around in a black leather jacket while singer Stevie Nicks graced the stage whirling around in a black chiffon gown and hammering her tambourine with her black leather gloves. Drummer and namesake Mick Fleetwood resembled an old sea captain, complete with glorious white beard and red kerchief – all he lacked was a wooden pipe – while bassist John McVie kept a low profile even during a sleek, early bass solo.

The band ripped through electrifying performances of Monday Morning and The Chain, apparently impervious to the audience’s incessant screams of, “I love you, Stevie!”

After the second song of the night, Nicks welcomed the audience with an enthusiastic cry of “Welcome, Perth, Australia!” delighting the crowd.

“It’s taken a long time to get back here,” Nicks confessed in her disarming American drawl, “so let’s just get this party started!” she bellowed, before charging into one of the band’s most recognisable hits, Dreams.

Buckingham took the mic after Dreams, and the crowd fell silent to hear his address.

“Every time we get together, we say, – œLet’s just go out there and have fun!’ ... and that’s something we’ve always done. We’re just gonna do all the songs we really love and hopefully they’re the ones you love, too.”

It certainly set the mood for the first half of the concert. Promoted as a Greatest Hits tour (the band hasn’t released a studio album since 2003’s Say You Will), the band relished the opportunity to revisit their classic hits, introducing most songs with a monologue or anecdote about how the song came into being, which gave the entire performance an intimate feel: the band members were speaking directly – and candidly – to their fans.

Nicks introduced Gypsy by reminiscing about the glorious era of West Coast music in the late 1960s and early 1970s, and recounting the tale of how she and Buckingham first met and then came to join Fleetwood Mac. The namedropping came thick and fast as she recalled the band opening for late legends Janis Joplin and Jimi Hendrix, much to fans’ delight.

The reflective mood persisted as the band tore through amped-up versions of Go Insane and Rhiannon. Buckingham was brutally honest as he touched on the past turmoil of the band, which has seen more volatile clashes and line-up changes than perhaps any rock band in history.

The most recent of these changes – the departure of singer and keyboardist Christine McVie – was particularly noticeable on tracks like Don’t Stop and Say You Love Me, where Nicks and Buckingham were forced to cover for her absence. The songs still got the audience to their feet, but there was definitely the sense that someone was missing.

Toward the latter half of the two and a half hour set, something changed. The pensive, chilled-out vibe that the band had evoked began to bubble and boil into something hotter.

It started with Tusk, the experimental marching-band tune that had the audience bouncing and screaming like maniacs for the first time all night as Buckingham pogoed around on stage like a man half – or even a third – his age; he turned sixty this year.

The Mac began to rock out after that. An acoustic version of Big Love proved that Buckingham has fingers of steel and a gravelly throat that even Dave Grohl would envy, while a metallic rendition of early tune Oh Well had fists pumping across the stadium, the band’s unique brand of folk-metal sounding clear and razor-sharp in the oft-maligned acoustics of Members Equity Stadium.

The biggest hit of the night was one from left field. Buckingham finished I’m So Afraid with a wailing guitar solo that just didn’t stop. Faces in the front rows melted as he stabbed desperately at the strings of his guitar with hands that, toward the end, were clearly burning – but the licks kept coming and the crowd kept roaring. It felt like there was a lot more at stake than there really was, and that is exactly why the entire show became so entrancing. Fleetwood Mac didn’t perform like a washed-up band rehashing their greatest hits for a quick buck: they performed as though every song, every harmony, every note was downright crucial – both artistically and personally. Nicks constantly stretched her throaty voice as high as she possibly could; Fleetwood hammered one breakdown after another on the drums; and Buckingham’s fingers were defiantly relentless. To see a band of sexagenarians at this point in their career trying this hard when they don’t even need to is something truly spectacular: the audience knew, definitively, that they were in the presence of legends.

When Buckingham’s guitar solo finished after more than five minutes, he was welcomed by a standing ovation – as was the band when they finished their set with an extended version of signature tune Go Your Own Way.

“We’ll see you next time!” Nicks promised, after the encore of Don’t Stop.

It was an enigmatic note for the 61-year-old to close on. Will Fleetwood Mac still be around for another tour in a few years’ time? Only time will tell, of course, but judging from the audience’s reaction, there’d be no complaints if these guys didn’t stop.