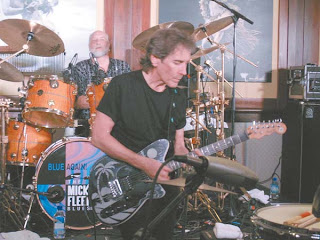 
On Maui for the holidays, Alice just rang in the New Year at Mala Wailea at a benefit show which also featured an incendiary performance by the Mick Fleetwood Blues Band, joined by British blues legend John Mayall, and members of Nickelback.

"It's become a tradition to do that show, and it's always great to turn something like that into a charity event," he notes. "These people are here already, so why not put them to work."

Backed by Mick Fleetwood on drums, Rick Vito on guitar and vocals, bassist Lenny Castellanos, keyboardist Mark Johnstone, and Eric Gilliom and Gretchen Rhodes of Island Rumours on vocals, Alice belted out his classic hits "Schools Out" and "No More Mr. Nice Guy."

"Mick Fleetwood is such a great drummer," he continues. "You forget Fleetwood Mac was a real rock band and he was one of the best drummers out there, and Rick's a great blues guitar player. And then you have John Mayall come up, how great is that?"