Big shows by big names dominated the 2009 global concert scene with, tried-and-true audience favorites making up the planet’s Top 5 tours and dominating the Top 10 in our first Top 50 global concert touring chart … ever! 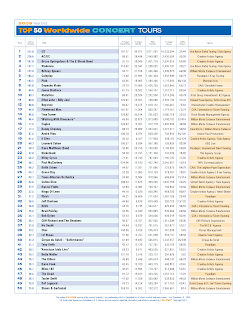 Criteria: The annual POLLSTAR ranking of the concert industry’s top performing artists is tabulated for all shows worked between January 1 and December 31, 2009.

All ticket sales figures are calculated in U.S. dollars and are based on reported information and extensive research by POLLSTAR. Copyright 2010.™