MICK FLEETWOOD WAS "OUT OF ORDER" DURING WAREHOUSE OPENING 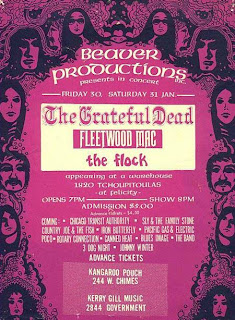 THE WAREHOUSE: THE FILLMORE SOUTH
01 January 2010 — by Randy Savoie
OFFBEAT.com


The Warehouse opened 40 years ago on January 30, 1970 in New Orleans.  The Grateful Dead played its opening night with Fleetwood Mac and a band from Chicago named the Flock, and it didn’t take long before rock history was made there.

The Warehouse down on the banks of the Mississippi River—1820 Tchoupitoulas St. to be exact. It was the epicenter of rock in New Orleans, the Fillmore South if you will, and you could see the Who or Elton John or David Bowie or the Eagles for five bucks, $5.50 if you waited until show time.

[excerpt]
“But the most elegantly apt visual of the night was Mick Fleetwood, all six feet nine inches of him, flying higher than anyone! He’d found an out of order sign in a broken soda machine and hung it around his neck as he looned around the stage.” The Warehouse owners let the Dead keep all the proceeds from that night. It was the least they could do.


A Tribute Movie is being made about the venue, a lot of archival info can be found here: (Warehousemovie)

A Tribute to the venue is being held at the end of January, 2010... Info here: (The Warehouse New Orleans)

Wolfgangs Vault has the full concert from a couple of days after the official opening of the Warehouse on their site to listen to or to purchase by download - along with the set from The Greatful Dead and The Flock.


This previously unheard Fleetwood Mac recording captures the band during this final year of the classic lineup. This run of shows, featuring the Flock, Fleetwood Mac and their friends, the Grateful Dead, has been forever immortalized in the Dead's classic song "Truckin'," as this was the New Orleans' engagement where members of the Dead and crew were arrested on drug charges. Originally the run was scheduled for the previous two nights, but Fleetwood Mac agreed to hang out for another day and a last minute third show was added on the afternoon of February 1, 1970 to help defray the legal costs involved in the Dead's bust.

This Fleetwood Mac set is unique among shows from this era as it not only contains some of the incendiary jamming they had been developing over the course of the past year, but also features the group digging back into their catalogue, performing several older gems as well.