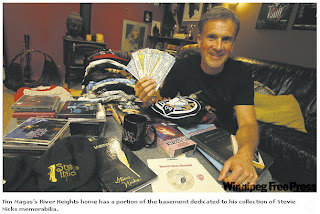 
In her June 7 review, the Free Press's Melissa Martin awarded the Fleetwood Mac concert at the MTS Centre four out of five stars. Tim Magas, a postal carrier who collects anything/everything associated with the band's ethereal vocalist, Stevie Nicks, gave it a significantly higher grade. 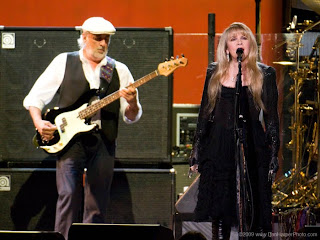 A story about Magas's Nicks-knacks ran the same day as the show ("Nicks Fix," June 6). "I haven't seen Stevie since they played here; they just finished their European tour and are now in Australia," says Magas, who, to date, has seen Nicks perform live on 19 separate occasions.

During the last few months, Magas has added T-shirts, hoodies and tuques to his mix, but his newest Nicks-related item doesn't exactly fall under the category "officially licensed merchandise."

"Michael wanted to get a third dog but I didn't," Magas says, referring to his partner. "To coerce me, he said I could name it anything I wanted. Well, (four) weeks ago, our new dog came home from the Humane Society and yes, I now have a Stevie, and I love her."
Nickslive at Saturday, January 02, 2010
Share