STEVIE NICKS REPORTED TO PERFORM ON GRAMMYS THIS SUNDAY 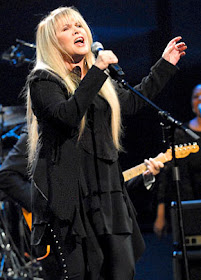 Stevie Nicks to Perform on the Grammys
US MAGAZINE


Stevie Nicks will give a surprise musical performance at this Sunday’s Grammy Awards, UsMagazine.com has confirmed.

The Fleetwood Mac frontwoman, 61, was inducted into the Rock and Roll Hall of Fame in 1998. She nabbed a Grammy for Album of the Year in 1978.

Earlier Wednesday, it was announced that Mary J. Blige and Andrea Bocelli will take the stage to sing Simon & Garfunkel's "Bridge Over Troubled Water" to fundraise for Haiti relief.

Beyonce, the Black Eyed Peas, Lady Gaga, the Dave Matthews Band and Taylor Swift -- who are all up for Album of the Year -- will also perform.