In music, success can be measured by many yardsticks: Billboard No. 1s, Grammy Awards, AA medallions. But as acts from Barrett Strong to Pink Floyd to Sean "Diddy" Combs have testified in song, when you come right down to it, it's all about the benjamins.
The fourth edition of our annual countdown of music's highest earners finds wide-eyed youngsters (Kings of Leon, Taylor Swift) rubbing elbows with their well-heeled elders (Bruce Springsteen, Fleetwood Mac). As the music industry grows ever more complicated, so does our top-secret* Money Makers formula -- comprising, among other variables, monies earned from CD and digital sales, publishing royalties and all forms of streaming. But one thing remains constant: Touring is the prime fattener of bank accounts, as evidenced most dramatically in the eye-popping, chart-topping tally of high-end road hog U2.
Here's the top 11. The full article and top 40 list can be found at Billboard Magazine

Fleetwood Mac lands at No. 11 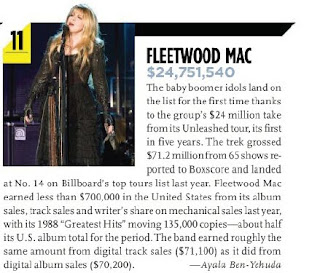