If you are a Taranaki local and went to one of December’s Fleetwood Mac concerts, you were very
much in the minority. But that was good news for Taranaki, as explains.

ANYONE who was in New Plymouth during that heady weekend just before Christmas will know that the city was bulging with visitors.

They were all here for a single reason – to attend one of the two concerts by rock group Fleetwood Mac at the TSB Bowl of Brooklands.

And while all these people were in Taranaki, not only did they spend, but they also enjoyed what Taranaki has to offer – and most say they’d love to come back.

How do we know all this? Because the region’s economic development agency Venture Taranaki commissioned an economic impact report on the weekend, which used sales data, attendee surveys and economic impact analysis to measure the difference between Taranaki having the concerts and not having them.

The report’s conclusions are fascinating. 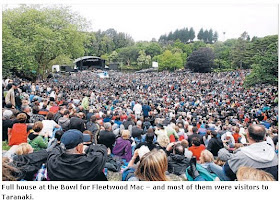 For example, the research showed that of the 34,045 people who crammed into the Bowl for the concerts, three-quarters were visitors with 27.7 per cent from Auckland. More than a third were aged between 45 and 54, and more than two-thirds were women.

That data speaks volumes about the years Fleetwood Mac was at its peak and who the fans were.
But there’s more. Of those 34,045 ticket sales, 25,622 or 75.3 per cent were to fans from outside Taranaki. Most came from Auckland, 16.4 per cent came from Wellington, 13.9 per cent from Waikato, and 10.5 per cent from Bay of Plenty.

Only 9.8 per cent of visitors came from Manawatu and 3 per cent came from Wanganui – the same number as those who travelled all the way from Canterbury for the concerts.

Close to 98 per cent of all the visitors stayed in the region for at least one night – their average stay was actually 1.76 nights – and 72.2 per cent stayed in commercial accommodation.
Of real economic significance for Taranaki is the fact that 26 per cent of visitors had never been to the region before. But did they enjoy themselves? Venture Taranaki’s research questioned visitors on how they rated the concert experience, with one being a low rating and 10 being a high rating.

Close to 80 per cent gave the experience a ranking of seven or more.
And when asked how they enjoyed Taranaki itself, 66 per cent ranked the Taranaki region as either vibrant or very vibrant.

Seventy-nine per cent said they’d come back for another event, with 58 per cent saying they’d like to return for a holiday.

Venture Taranaki chief executive Stuart Trundle says the visitor rankings of Taranaki pleased him most of all.

With the concerts, we were aware we were being presented with an opportunity to maximise the promotion of Taranaki.

It’s great to know that so many people who came to the concerts say they would definitely return.

It shows that you have to get people to visit a region for them to change their perceptions about a place.

It’s a much better way than simply putting nice images on a wall at Wellington or Auckland airport.’’

The research also surveyed the Taranaki residents who attended the concerts, and that has thrown up some interesting data.

So while this survey showed that the Fleetwood Mac concerts provided a $23.08 million initial financial boost to the Taranaki economy, which resulted in a net profit to the region of $9.56m, the benefits obviously go beyond the cash.

Not only did the concerts draw national and international media attention to the region, but they attracted many people who had never been to Taranaki before. And they were impressed, which means there’s every chance they will come back.

‘‘While the measurable economic benefits were certainly a boost for the region, the many non-financial benefits offer greater long-term potential,’’ says Mr Trundle.

‘‘Attracting new visitors to the region and delivering an experience resulting in significantly more positive perceptions of Taranaki will deliver further benefits down the line, as the region looks to meet future growth needs.’’
Nickslive at Sunday, February 28, 2010
Share