MICK FLEETWOOD "In My Own Words" 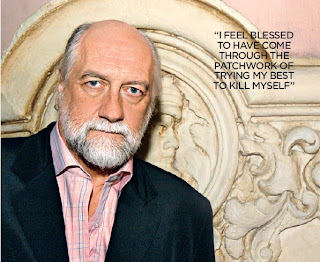 
After surviving his fair share of band in-fighting and rock’n’roll excess, this 62-year-old drummer is following up the Fleetwood Mac renaissance with a blues revival of his own
I was a Royal Air Force brat. My father served in the RAF and we moved a lot. When people ask me where I’m from, I say, “Not really anywhere.” So I was well suited to the rock’n’roll life, because travelling and being in strange places is a very comfortable thing for me.
My upbringing was universal – Egypt, all over England, Norway. As a young chap, I spoke fluent Norwegian. I can’t remember a word now.
My school days were always numbered. Today it would be known as a learning disability; I loved discussion and drama, but I couldn’t put it down on paper. As a result, I left school at 15 and went to London with my drum kit. Luckily, I was supported by my parents.
By happenstance, I met [keyboard player] Peter Bardens. He lived next door to my sister, with whom I was staying, and he heard me play my drums. Peter had just crossed over into early R’n’B and blues and we listened to loads of his records. I blundered into blues. It suited me as a musician and, later on, I realised it suited me as a person, in terms of less is more; I was never a great technician.
The Fleetwood Mac story is unique. We’ve had many changes stylistically and we’ve been blessed with many talented people.
The original line-up was only really known in Europe and Australia. When we lost founding member Peter Green, we spent the next few years touring and concentrating on working in America; I decided we should make a stand there. Then came the fairytale story of Lindsey Buckingham and Stevie Nicks joining.
We made Fleetwood Mac, our first album with Lindsey and Stevie, in 1975 and it sold well. Then we made Rumours in 1976 and all hell broke loose. It was to be the success story. It was incredibly gratifying.
We also made lifestyle changes – not all of which were good. We had a lot of fun, which for many of us turned into a nightmare mist of alcohol and drugs, mixed with the belief in what we did. That’s what ended up saving us, but there were ramifications; trying to juggle a career, travelling and family is hard for anyone.
I was first married to Jenny, who I ended up marrying twice. We have two daughters [Amy Rose, 38, and Lucy, 36], but it was dysfunctional in the later years. Then I married Sarah and, eventually, my present wife, Lynn. We have beautiful seven-year-old twins, Ruby and Tessa. I’m surrounded by ladies I love.
My role in Fleetwood Mac has often been as piggy in the middle. It’s a fascinating story and hasn’t been, as Lindsey would say, “always easy”, but we’re emotionally connected people. The past year on the road together has been tremendous and could be the reason why there will hopefully be more music to put on an album.
God knows why but, at 62, I’m playing harder and louder than ever. I can’t work it out. I feel blessed to have come through the patchwork of trying my best to kill myself in good shape.
These days, we travel in style. We have our own plane, as opposed to driving in a van for 20 hours. When I tour with my blues band [The Mick Fleetwood Blues Band], I do exactly that.
I live in Hawaii and I’m where I dreamed of being at this point in my life. I’m fortunate to have pulled that off. I have a lovely home, I play golf and I socialise, and I get to play with my band quite a lot.
I also have a wine company. Not a winery, as it’s a very wealthy man’s game. When I started, many people thought I was another celebrity sticking my name on a bottle. It wasn’t that – we work very hard and about 80 per cent of the wines are blended by me. Sometimes I have to do short tasting sessions while I’m out on tour.
I met Billy Thorpe though a friend. I was looking for someone to fulfil the singing chores in a band and he fitted really well. In truth, I had no idea of his stature in Australia; he truly was an icon. It’s fair to say that the AC/DCs of the world listened to a few of his records.
Billy was a very talented man. Sadly, he departed in 2007. I saw his wife and children the last time I was in Australia. He’s definitely missed in my world.
The sort of humour I love is fairly stupid, really. It’s being able to laugh at yourself and end up with tears pouring down your face. It’s not very sophisticated.
CLAIRE BRADLEY
The MickFleetwood Blues Band album, Blue Again (Universal Music), is out now. See them live with Boz Scaggs and Michael McDonald, February17 to 28. For tour details, visit www. ticketek.com.au and www.ticketmaster.com.au.
Nickslive at Sunday, February 14, 2010
Share