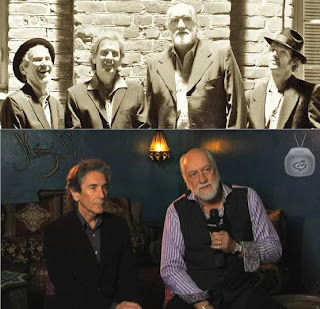 
The 2010 Grammys were a splendid time. We here at Rhapsody HQ headed down to Los Angeles for the event, where we had the opportunity to interview one cool pop star after another. The coolest of them all just might’ve been Mick Fleetwood, whose album Blue Again, recorded with guitarist Rick Vito, was nominated for Best Traditional Blues Album.
Wait a minute. Did you say Mick Fleetwood? The blues?
That’s right. Long before “Rhiannon” and Stevie Nicks’ sexy-witch dance, the legendary drummer served time backing some of the great musicians in the British blues scene, including John Mayall. In fact, the Mac actually started life as a hardcore electric blues band, featuring Peter Green, mercurial guitarist and No. 1 rival of Eric Clapton. So yeah, Mick has kind of come full circle as of late.
We were lucky enough to sit down with both Mick and Rick, who gave us the scoop on Blue Again -- plus lots more on the blues, Peter Green and the long, tangled history of Fleetwood Mac.
Check out the video here: Rhapsody
Nickslive at Thursday, February 11, 2010
Share