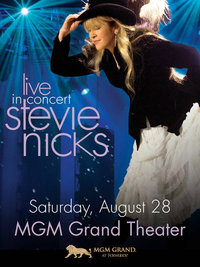 WPLR/MGM AT FOXWOODS
“STEVIE NICKS” TICKET GIVEAWAY
Entries Accepted Until August 22nd
Stevie Nicks is an American singer and songwriter, best known for her work with Fleetwood Mac and an extensive solo career, which collectively have produced over twenty Top 50 hits. Her ethereal visual style and heavily symbolic lyrics have brought her both acclaim and criticism.
If you have never seen Stevie Nicks perform live then you owe it to yourself to see her live in concert.
Stevie Nicks is coming to The MGM Grand at Foxwoods for one night only on Saturday August 28th. PLR has a pair of free tickets up for grabs. Want to win them?
Just enter to win! One entry will be drawn at random for a pair of tickets. Good Luck!
Tickets for Stevie Nicks are on sale now. Ticket can be purchased at the MGM Grand at Foxwoods Box Office at 866-MGM-0609, Ticketmaster or online through www.MGMatFoxwoods.com.
SOME OFFICIAL RULES:

The full listing of rules are on the WPLR website here
Enter by going to WPLR.com anytime during the contest period.  Then entrants will enter to win logging into the “PLR Insider” Member Center then by providing all information asked for on the contest page (the entrants full name, address, gender, town, zip code, email address, phone number and date of birth).  (1) entrant will be randomly selected from the website, at the end of contest period and will be declared the grand prize winner.
You may enter the contest only one time during each contest period and only (1) prize will be awarded per person.
Nickslive at Monday, August 16, 2010
Share