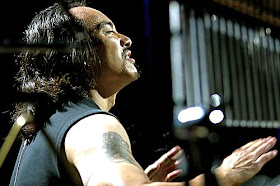 After being away for a number of years and a couple of tours with Stevie Nicks, Percussionist Taku Hirano is set to play for Stevie once again during the month of August. Taku toured extensively with Fleetwood Mac on their world tour in 2003/2004 and afterwards with Stevie and Lindsey on their various tours in 2005, 2006 & 2007. Taku was last seen with Stevie's band during a string of dates in March, 2007 in Las Vegas after which long time Fleetwood Mac percussionist Lenny Castro took over.
Taku on Myspace | Tao of Sounds
Also... Bass player Al Ortiz posted on his Facebook Page today that Rehearsals are going great and that Waddy had the band run the set almost three times... Everyone is sounding great including Stevie's singing.
First show is this Wednesday August 4th - Santa Barbara, CA.
Nickslive at Sunday, August 01, 2010
Share