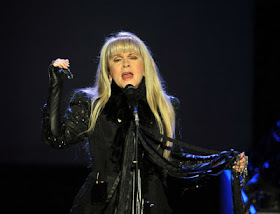 It was Rolling Stone magazine that gave 62-year-old Stevie Nicks the moniker “The Reigning Queen of Rock and Roll.” Nicks, a member of the Rock and Roll Hall of Fame, has sold more than 120 million records over her career as a solo artist and with 1970s superstars Fleetwood Mac.
When she joined the group in 1975 with her former lover, guitar guru Lindsey Buckingham, she was categorized as the most beautiful rock star of the time. Fleetwood Mac was one of the most successful touring bands of all time, playing a slew of radio hits in true innovative jam band style, with some songs extended to a 20-minute orgy of rock. The key to the success of the band was Nicks’ characteristic contralto voice mixed with Buckingham’s piercing guitar solos and his unique vocals. The pair played off each other often in a drug-induced trance, in perfect sync with the mid-‘70s carefree lifestyle.
While Buckingham went on to a solo career emphasizing the hard-core jam and guitar wizardry of his former band, Nicks took on the role of rock-and-roll diva, playing the more melodic ballad oriented songs of Fleetwood Mac. At the same time, she built her own impressive library of solo hit songs.
Nicks is poised to release her first solo record in 10 years, which may prove to be one of her greatest recordings. Collaborating with songwriting legend Dave Stewart of Eurythmics fame, the album has been eagerly anticipated by the music industry and fans alike.
The sultry diva made a special stop Aug. 4 at the Santa Barbara Bowl, her only California stop on her impromptu six-city mini tour. Appearing in front of an impressive ensemble of veteran rock musicians, she appeared larger than life — the iconic rock star. The crowd seemed captured and mesmerized from the moment she began to sing until the moment she stepped offstage — two hours and scores of hits later.
The devilish diva pranced, danced and swayed to the powerful rhythms of the band, and chatted and joked at ease with the audience between songs. Occasionally she would shuffle offstage, appearing with yet another characteristic vintage scarf or trademark hat. Each garment seemed to represent a different emotion as the singer entwined herself and her band mates in mythical poses.
The show proved to be an emotional event on many levels for local fans of the iconic rock star. First and foremost, the event was a benefit for an 8-year-old local resident named Cecilia, who is fighting a battle with a rare form of cancer. Nicks, who has known the family for several years, arranged to perform at the Bowl and donate her salary for the event to help the family.
Nicks has always nursed a persona of a Wiccan-like sorcerer, with her trance-like dancing and twirling of sensuous garments. It seemed fitting that she performed a concert for a sick little girl to transfer her immense energy and inspire hope for the honored guest and her family.
The concert was an emotional moment, as well, for many aging fans in the audience, who sought a transference of youthful energy from pleasant memories of a bygone era. Toward the end of the show, Nicks methodically proceeded across the front of the stage, locking hands with countless fans, seeming to make that enigmatic connection to transfer energy from the crowd. Then she slowly went around to her army of accomplished musicians and touched each one in a special embrace, again seeming to transfer the energy from the audience to the band.
The band played a blazing finale of “Rock and Roll,” a fitting tune from another 1970s legend, Led Zeppelin, while the video background portrayed scenes from ‘70s concerts.
As a beautiful but cool summer night descended on the Bowl, Nicks then returned for one last beautiful love song ballad, “Love Is,” which emanated through the amphitheater like magic.
L. Paul Mann is a Noozhawk contributor
Nickslive at Friday, August 06, 2010
Share