STEVIE NICKS IS SHOOTING FOR A MARCH RELEASE 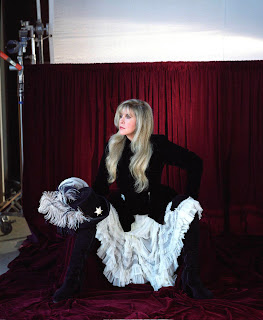 
The call rings at precisely the appointed time the evening of Friday the 13th.
“It’s Stevie Nicks,” says the oh-so-recognizable rock voice, full of energy and a fair amount of good cheer.
Wait a sec. Isn’t she a bit hesitant about baring her soul on this day of supreme superstition?
Not a bit.
“I didn’t even know it was Friday the 13th. Anyway, it’s a good day for me, you know,” says the woman who’s long had mystical elements tied to her persona since her whirling, twirling days on stage with Fleetwood Mac and thereafter.
Great grist for the mill.
Headline over an Associated Press story from 1998: “Stevie Nicks Denies Witch Rumor.” In the article, Nicks says, “I can’t believe people are still telling me I’m a witch because I wear black.”
Now, in summer 2010, as Nicks is in the midst of a short tour that includes a Wednesday night stop at the Turning Stone Resort and Casino Event Center in Verona, N.Y., Nicks is in a good mood about a lot of things.
As the 62-year-old singer and songwriter continues, you get the feeling that Nicks’ life is full of a lot of good days.
She’s positively effusive about the aura surrounding her collaboration with Dave Stewart for Nicks’ upcoming solo album, her first since 2001.
“It’s the best time I’ve had since my teens. I was going to say my 20s, but that wasn’t all that much fun. So, since high school,” Nicks says of her work with Stewart. Stewart previously teamed with Annie Lennox in Eurythmics, the British band that landed the song “Sweet Dreams (Are Made of This” at No. 1 on the Billboard Hot 100 chart in 1983.
Nicks teamed with Stewart after he grabbed his guitar, walked into her living room and simply rocked her world.
Before that magical day, Nicks’ co-writing process centered around guitarist Michael Campbell sending her tracks of his lines.
“This is the first time I have ever written in the same room as somebody,” she says.
To prepare for the collaboration, Nicks sent Stewart a collection of 50 poems she’s written. “I didn’t expect him to read it, really, but he did,” she says. “He handed me a poem and said, ‘Let’s start with this one. I love it.’
“He plays guitar and gives me this no-frills English works and says, ‘Go.’ Within 10 minutes we had finished the song,” Nicks says.
“Suddenly a light bulb came on and I found out why great songwriting teams worked between people who could write great songs on their own,” she says. “Lennon and McCartney. Rogers and Hammerstein.”
Their two greatest individual attributes fit together like the last two pieces to a puzzle, Nicks explains.
“He doesn’t write long story poems. I have that to give him,” Nicks says. “I don’t have a million chords. He has that to give me. I thought, I could get at a piano for a thousand years and never write a chord structure like that. The two of us are able to give each other a whole other world.”
The album, produced by Stewart, will contain nine songs they co-wrote and five Nicks wrote alone.
It’s almost done, Nicks says, and they’re shooting for a March release, even though it could be ready months before that.
“We don’t want to be declared a Christmas album with a release around the holidays,” she says. “March is a good time to drop the record and be out on the road.”
She’s not playing any of them in concert now, leaving this tour to her huge hits — solo, such as “Stand Back” and “If Anyone Falls” and with Fleetwood Mac, such as “Rhiannon (Will You Ever Win)” and “Landslide.”
If she played one of the new ones live, she says, a video would be on YouTube minutes later. “I don’t want these songs to be leaked out,” Nicks says. “I want the big reveal to be the record.”
She’ll talk about the songs with enthusiasm, though.
She calls “Italian Summer,” inspired by a trip to Ravello, Italy, “the sweetest love song I’ve ever written. And I didn’t write it about anybody. It’s about being in Italy,” Nicks says.
And she’s proud of “The Soldier’s Angel,” which she’d been promising herself to write since first visiting the soldiers hospital in Bethesda, Md., five years ago.
For that one, she and Stewart stuck with a demo she recorded herself.
“I decided there’s no way to beat the demo I recorded myself at home late at night,” Nicks says. “It’s brutal and honest, for the kids that are injured.”
Nicks and Stewart thoroughly enjoyed their sessions, she says. "We had similar relationships in our pasts,” Nicks says. “Stevie and (Fleetwood Mac guitarist) Lindsey (Buckingham). He and Annie. We have that in common.”
THE DETAILS
What: Stevie Nicks in concert.
When: 8 p.m. Wednesday.
Where: Turning Stone Resort and Casino Event Center, Verona.
Tickets: $80, available at the Event Center
box office, Ticketmaster outlets, www.ticketmaster.com and 877-833-7469.
Nickslive at Sunday, August 22, 2010
Share