STEVIE NICKS WANTS HER FANS TO BE HONORABLE 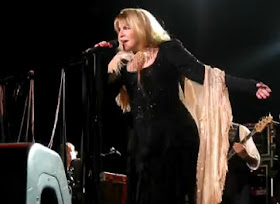 After coming off the road following a 2005 tour with Fleetwood Mac, Stevie Nicks planned to get back to the studio to record a new solo album. She was talked out of it by her manager, of all people.
There's no point, she was basically told. After all of her time and expense, Nicks' new creation would just end up available on some nefarious website for free download. That's just the way of the world now in the music business.
"That's why I didn't do another record," Nicks said in a recent phone interview from her Los Angeles home. "I was going to do another record, but my manager basically said not to bother because 150 of your closest fans will buy it and then in the dark of the night they'll just push `send' and send it out to everyone they know.
"I was horrified."
It was following Fleetwood Mac's most recent tour, which ended in December, that Nicks decided to throw caution to the wind and get started on a new album.
"One day I woke up and I just said, `I'm making another record and I don't care if anybody buys it,'" she recalled. "That's OK because at least I'll have done it. At least I made the effort.
"I'm going to hope that my fans are honorable and that they don't -- in the dead of night when nobody can see them -- send out my record to 500 of their friends. That's not because I need the money. It's because I need to know that my fans are honorable."
Nicks' justifiable fear extends to her brief summer tour, which comes to the MGM Grand at Foxwoods Saturday night. She will stick to her solo hits and Fleetwood Mac favorites and is not showcasing any of the new tunes.
"No, because we don't want my brand-new song filmed and put on YouTube the next morning," she said. "Nobody is going to hear one note of this record until it is released. And then it can go everywhere, but at least it was new for one day.
"All you can do is laugh," she added, "but for five years, I cried about this."
In making the new record, Nicks enlisted Dave Stewart of Eurythmics fame to produce and she called the sessions "the best time I've had ever."
She also ended up writing songs with Stewart, something she said she never did with Fleetwood Mac's other main songwriters, Lindsey Buckingham and Christine McVie.
"It has just been an eye-opener for me," she said. "I've been very selfish about writing with anybody else and I never have -- I didn't write with Lindsey; I didn't write with Christine; I didn't write with anybody.
"I understood, all of a sudden, why people like Paul McCartney and John Lennon and Rodgers and Hammerstein and all of the great songwriting teams wrote together. They still wrote alone, but why they wrote together, also. It opens up something that you don't have, which in my case it's that I don't know thousands of chords.
"I only know four chords, and so writing with Dave opened up a whole side of music that I've never had at my fingertips before. These nine songs that we wrote, actually, are somewhat more musical because they have more in them. It's just been a lot of fun."
Nicks was thrilled when Stewart suggested that they just put her completed poems to music, as she was used to combining verses from several of her poems and creating lyrics in that manner.
"More of my words actually got into these songs because he'd say, `Well, I like this poem and I don't really want to take two verses out. Let's just do it. Let's just put all the verses in,'" Nicks, 62, said. "Of course, I'm just like, `Right on,' because my whole story is going into my song.
"He just starts playing ... and I just basically start reciting, in song, from my poetry page and in about five minutes we had written a really beautiful song and my life was forever changed.
"I think that the product that we've come up with is really spectacular. I could be wrong, but I don't think so. I think it's really, really great. I think people are going to love it."
One of the songs on the new album, which Nicks has targeted for a March 1 release, is especially dear to the singer, "Soldier's Angel." The song came about after Nicks' first trip to visit wounded soldiers at Walter Reed Army Medical Center in Washington, D.C., and at Bethesda Naval Hospital in Maryland.
"I wrote a poem called `Soldier's Angel' in 2005 and it is very much for them," she said. "I was going to make it into a song, but I never did. Well, I finally did it and it's pretty chilling, actually. It's about visiting the soldiers and seeing everything that goes on there -- the good, the bad and the ugly.
"I'm pretty proud of it and I hope the soldiers are proud of it, too, because it's theirs."
MGM Grand at Foxwoods is at 240 MGM Grand Drive, Mashantucket. Saturday, 8 p.m. $85-$135. 866-646-0609, www.mgmatfoxwoods.com.
Nickslive at Tuesday, August 24, 2010
Share