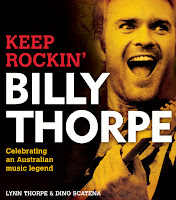 'Keep Rockin' celebrates the legend and the life of Billy Thorpe in comprehensive style, with dozens of interviews - from people as diverse as Mick Fleetwood, Jimmy Barnes and Olivia Newton-John - as well as hundreds of photos, memorabilia, personal recollections from Lynn Thorpe, Billy's widow, and never-before-published material by Billy himself.
From Thorpie's early days as a child star in Brisbane to his meteoric rise with the Aztecs, his hard-rockin', hard-livin' Sunbury days and his phenomenal return to Australia in the nineties, Keep Rockin' is the definitive tribute to Billy Thorpe, as told by those who knew him best.
Billy Thorpe died suddenly on February 28 at the age of 60. One of Australia’s true rock legends, Thorpe was a teen star in the 60s before reinventing himself in the 70s with The Aztecs as one of Australia’s greatest live rock acts.
THE FLEETWOOD CONNECTION 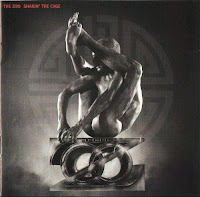 From 1990, Thorpe collaborated with Mick Fleetwood (of Fleetwood Mac) and Bekka Bramlett in Fleetwood's side project, a band called The Zoo, which resulted in the "Shakin' the Cage" album and "Shakin' the Cage" single in March 1991. Thorpe had written all ten of the tracks, including two co-written with Bramlett. The Zoo went on tour in Australia in 1991.