"GET A JOB!" WORLD PREMIERE... MICK FLEETWOOD MAKES AN APPEARANCE 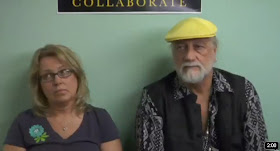 “GET A JOB!,” the hilarious, high-spirited motion picture comedy starring Willie K and Eric Gilliom and filmed and produced entirely on Maui, will have its World Premiere at the Hawaii International Film Festival at the Regal Dole Cannery Stadium 18 on Saturday, October 16, 7:15pm and again will be shown on Saturday, October 23 at 3:15pm. Tickets are on sale now for both screenings. (Check www.HIFF.org for information on ticket sales.)
It also boasts special appearances by Mick Fleetwood, Willie Nelson, Pat Simmons of the Doobie Brothers, Marty Dread, and many many more.
Here is the trailer... Catch a glimpse of Mick at the 2:01 mark