THE MAC IS BACK.... IF ONLY BRIEFLY 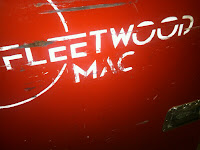 All week long word started trickling out about this Fleetwood Mac show that was rumoured to be happening in October... Details have been pretty thin in the when and where department... But a few things are fact.
Beginning this past Thursday the members of Fleetwood Mac along with all their usual back up musicians & sound and lighting guys have been holed up inside Soundstage 15 on the Sony Lot in Los Angeles for 3 quick days of rehearsals preparing for their first show together in about 10 months. It was obvious from the start that this was a corporate gig they were booked for, as no tour is in the planning stages.  As it turns out the rehearsals are for a show they've booked for this coming Tuesday outside of the LA area... No word on the event they are booked to play, I'm sure that will come out later.
A few Tweets from some close to the events on Stage 15:
garykordan: "I am losing my mind. We are standing outside Stage 15 listening to Fleetwood fucking Mac rehearse for their upcoming tour!!!"
"I am standing 6 feet away from Stevie Nicks and 10 feet from Mick Fleetwood while they perform Rhiannon."
cswaudio "Last day on the sony stage with Fleetwood Mac. Such a wonderful time getting to know such great people and watchin' them rock out!"
kevinolearytv: "Fleetwood Mac is rehearsing beside us in stage 15, I just walked over to check them out. I'm a fan"

garykordan: "Right this second I am 1 of 80 people watching a private dress rehearsal by Fleetwood Mac on a massive soundstage. Unreal goosebumps."


Fleetwood Mac haven't been together as a band playing since they ended their Unleashed Tour in New Zealand in December, 2009 so this is a pretty big deal!.  There's been speculation that Fleetwood Mac would tour in 2011 but personally I can't see that happening given the fact that Stevie is working on her new album and plans to release that early next year and tour behind it.  If it does happen, I can't see it happening until late in the year...
Good Luck Fleetwood Mac, have a great show!  Nice to see you all playing nice together...
Photo by: Kevin O'Leary
Nickslive at Sunday, October 17, 2010
Share