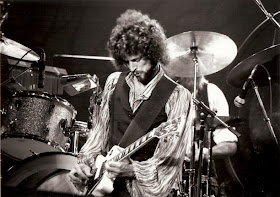 In the annals of Fleetwood Mac’s guitar history, Peter Green gets nearly all the black — in part because of his key role in making the Gibson Les Paul Sunburst an integral part of rock and blues history. But the Mac also featured another great Les Paul player who took lead of the band and helped the group reach its zenith of popularity: Lindsey Buckingham.
Full Article
Nickslive at Tuesday, October 05, 2010
Share