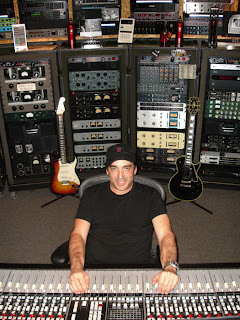 BACK IN THE MIX WITH STEVIE NICKS....

It was announced today (November 1st) that Dave Stewart was meeting up with Chris Lord-Alge for the first day of mixing Stevie's new album. Chris has a long history with Stevie stretching back to 1991's "Timespace". She seems to prefer him over other mixers... which was well documented in the "Destiny Rules" documentary during the recording of Fleetwood Mac's 2003 "Say You Will" album. Chris mixed Stevie's last album "Trouble in Shangri-La in 2001 and did some work on "Say You Will".

It appears things are moving along quite nicely on this album... Won't be long now!
"Chris Lord-Alge has an uncanny knack for making rock tracks both hard-hitting and hit-parade-friendly. The triple Grammy-winning mixer has become a genuine legend of the studio industry, to the extent that Allmusic.com needs eight pages to list his 750-plus credits. The first are from his early days as an assistant engineer at H&L Studios in New Jersey. This was followed by a stint as staff engineer at Unique Recording in New York. Lord-Alge moved to Los Angeles in 1988, and in subsequent years he added names such as Prince, Tina Turner, Stevie Nicks, Joe Cocker and Peter Frampton to his résumé.