A COUPLE OF NOTABLE BLU-RAY RELEASES - BOTH INCLUDE STEVIE NICKS 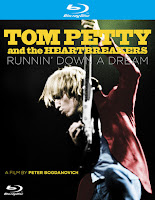 Runnin’ Down A Dream

Peter Bogdanovich’s Grammy-Award winning film about Tom Petty and The Heartbreakers is now available on Blu-ray for the first time. The Blu-ray version of Runnin’ Down A Dream can be purchased exclusively at Amazon.com until December 21st. At that time it will be released via all other outlets.
[Really great documentary if you haven't seen it, I highly recommend it.]
In one segment, Tom describes how it came to be that Stevie recorded "Stop Draggin My Heart Around".  This doc also includes Tom and Stevie in the recording studio putting the vocals on the track & Jimmy Iovine talking about how he knew the song was going to be a winner with Stevie singing a song from a guys perspective... and of course Stevie's in here herself commenting on the song.
Source: TomPetty.com

Heavy Metal on Blu-ray will be presented in 1.85:11080p video and 5.1 DTS-HD Master Audio. The 'Imagining Heavy Metal' documentary and deleted scenes are the only known bonus features at this time.
Source: TheHDRoom
Nickslive at Monday, November 15, 2010
Share