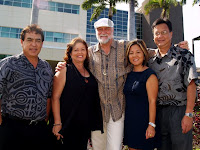 
Mick Fleetwood, legendary drummer and co-founding member of Fleetwood Mac, joins the Maui Memorial Medical Center Foundation (MMMCF) Board of Directors.
Fleetwood, who lives on Maui, said he was honored to serve among such a great group of civic leaders. “MMMC has made great changes and additions recently, and plans more to serve our community. I am committed to help bring awareness and support here, and in my own small way, contribute to bring health-care to the next level on Maui,” said Fleetwood.
MMMCF Board President, Saedene Ota said she was thrilled with the addition. “His creativity and enthusiasm for giving back to our Maui community will be a great asset, for not only the board, but for healthcare on Maui as well,” said Ota.
The muti-Grammy Award winning artist and inductee of to the Rock n’ roll Hall of Fame is no stranger to the island music scene here on Maui. His Mick Fleetwood Island Rumours Band was developed in collaboration with island musicians, creating a unique blend of rock and Hawaiian music. Fleetwood is also expected to open a new restaurant, bar and night club in Lahaina, Maui on Front Street, in the Summer of 2011.
Fleetwood is among a class of six new members of the MMMCF board. The list includes:

“We are extremely proud and pleased to welcome all of our new board members to the hospital.” Ota added.
The Maui Memorial Medical Center Foundation is a private, non-profit organization that raises funds to support the Maui Memorial Medical Center in Kahului. The facility is the only full-service, acute care hospital on the island.
The foundation works each year to raise funds for patient programs, equipment, medical education, capital building and special projects.
Nickslive at Saturday, December 18, 2010
Share