With Dave Stewart in the directors chair... a video shoot is scheduled beginning January 30th to shoot the first video for single "Secret Love".... Should be really great!! 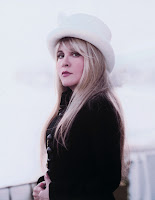