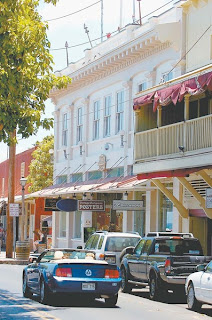 No specific date yet on when this restaurant will open, but you may recall Mick himself in a recent interview said the process was in the "lawyer" stage, so it sounds like things are just being finalized...  You may also recall back in November Mick appeared in a segment on the Golf Channel "GolfNow Ka'anapali", where Lauren Thompson interviewed Mick on Front Street in Lahaina at The Lahaina Store the former Planet Hollywood Restaurant.  This is the future site of Mick's restaurant... She said in her video diary it would open in the summer of 2011.  You can still catch that bit of footage online in Lauren's video diary.
In any case, in the on-going evolution of branding Mick Fleetwood, this venture of Micks makes me want to head on over to Maui when it's up and running!!... I think it would be pretty cool to check out...
Nickslive at Wednesday, January 05, 2011
Share