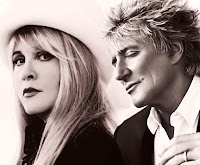 
Not just one, but two legendary musicians are stopping by! ROD STEWART and STEVIE NICKS are here, and they’ll both sing one of their classic hits. Plus, they’ve got an exciting announcement that you don’t want to miss!
This text was taken from the email notification from The Ellen show.

WHO WILL BE THERE:
What we know so far is that RICKY PETERSON - Stevie's keyboard player has confirmed he'll be there... WADDY WACHTEL, Stevie's lead guitarist and Musical Director, according to his facebook page, will also be performing on Ellen along with Stevie's bass player AL ORTIZ who will be playing bass for both Stevie and Rod...  Who's drumming? Jimmy Paxson? not sure... Percussion?  Not Taku - he's busy preparing for a Josh Groban tour... Lenny Castro possibly?  Is Carlos Rios back along with Sharon and Lori?
RUMOURS AND SPECULATIONS have Stevie and Rod announcing a joint tour or slate of shows together.  With Stevie's new album not expected now until late spring along with Dave Stewart still talking about doing shows with Stevie this Spring/Summer, and his own album now slated for a May release - plus the fact that Rod has Euro dates booked beginning June, one can only assume that IF Stevie and Rod were to announce a joint tour that it will be a short pre-album release tour.  We will have to wait and see this Thursday.
Nickslive at Sunday, January 09, 2011
Share