Melbourne’s Architecture In Helsinki are back with the followup to 2007’s Places Like This. Moment Bends was recorded in the band’s studio space, Buckingham Palace. 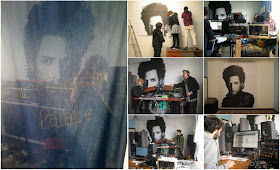 Buckingham Palace is named after the huge photo mural of Fleetwood Mac’s Lindsey Buckingham that the band hung on the wall. “His hair was massive and his stare piercingly intense and mysterious,” Bird recalls of the man he calls, “a long-time spiritual influence.” Buckingham’s meticulous and mysteriously intense take on summery pop appears to have infiltrated Moment Bends highlights such as “Contact High”, ‘Everything’s Blue” and “Escapee”.
The first sample from the Moment Bends, the simple and effective “Contact High,” has the “dynamic bounce” part down, with rubbery analog synths and a little bit of drums framing Cameron Bird’s falsetto.
You can hear "Contact Hight" at Stereogum