STEVIE NICKS: Sunset Sessions.... Notes From The Inside 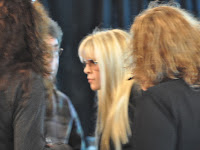 Sunset Sessions took place over the last three days in San Diego at La Costa Resort and Spa. Stevie appeared on the last day yesterday in a two hour album listening event and Q&A taking place between 3-5pm that included previewing 8 songs from her upcoming In Your Dreams CD. Stevie arrived with Sharon Celani, Lori Nicks and her Manager Sheryl Lewis. Stevie was reported to be in a great mood the whole time... Singing along to her music, very candide during the Q&A and of course had the place laughing a few times. 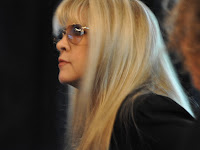 Also previewed was the "Sizzle Reel" video/photos footage mashed together with songs from the new album. It was a teaser of about 2 minutes in length showing Stevie in different settings through out the recording process - in her home studio, on the beach, with Dave Stewart etc.  This quite possibly could be the trailer that Dave Stewart was to debut this month for Stevie's move/documentary.  Stevie ended the evening sitting in and performing with Vanessa Carlton on a song called "Carousel".


First off, from everything I've been reading (and this is from legitimate fans in attendance, not just industry insiders) we are going to be blown away by this album, it sounds that good!
Songs reported to have been previewed:  A Vampire's Dream, For What Its' Worth, In Your Dreams, The Ghosts Are Gone, Soldiers Angel, Annabell Lee, Italian Summer, Cheaper Than Free video previewed.
LADY FROM THE MOUNTAIN:
There was some early confusion over one song in particular previewed.  It was reported late last night that "Lady From The Mountain" was a song previewed at the event and on the new album.  Which would be NEW news!  Now what I'm hearing is the Twilight song (or "A Vampire's Dream") is actually "Lady From The Mountain" - meaning the Twilight song sounds very similar to "Lady From The Mountain" melody wise... I'm still a bit confused on that one as the old demo lyrics don't fit with a Vampire theme... So what may have happened is the melody from the old demo may have been taken and transformed with new lyrics to fit the Twilight inspired theme of "A Vampire's Dream".  Make sense?
Also:

Continue at the link below for other photos from the event: 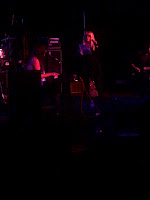 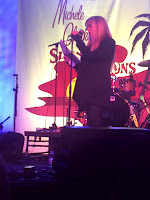 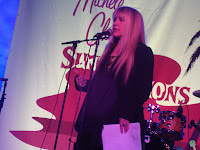 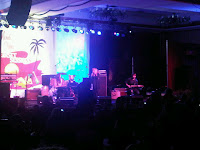