The Rock and Roll Hall of Fame and Museum says it will open the world's first exhibit devoted to rock's most influential female artists. 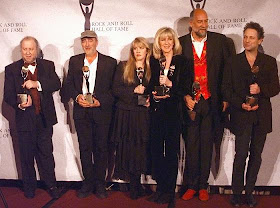 "Women Who Rock: Vision, Passion, Power"
Open May 13, 2011 - February 26, 2012 | Rock and Roll Hall of Fame + Museum: Floors 5 & 6
[link] RNR Hall of Fame
The Rock and Roll Hall of Fame and Museum will open a groundbreaking and provocative new exhibit that will illustrate the important roles women have played in rock and roll, from its inception through today. Women Who Rock: Vision, Passion, Power will highlight the flashpoints, the firsts, the best, the celebrated -- and sometimes lesser-known women -- who moved rock and roll music and the American culture forward.
Eight eras covered spanning the 1920's through the 90's.
STEVIE NICKS AND CHRISTINE MCVIE
both Hall of Fame inductees will feature in the 70's era.
I Will Survive: The 1970s – Rockers to Disco Divas
Women are in the center of the ‘70s mainstream, from Joan Jett and the Runaways, Heart and Fleetwood Mac to Donna Summer. The gains of the feminist movement throughout the ‘70s enabled women working in all areas of the music industry to assume more control over their careers.

Among the artifacts that will be displayed are:


Get all the details here
Nickslive at Thursday, February 03, 2011
Share