Alex Castino an Independent Videographer & Editor with Jokerstyle Productions today posted on Twitter that he's filming Lindsey's Solo Rehearsals in LA... You read that correctly... REHEARSALS!  Obviously Lindsey is gearing up with something... The production co. looks as if they put together promotional videos similar to the ones we saw for his Gift of Screws album where Lindsey is sitting there speaking about each song... It's also possible that Lindsey is compiling footage for a sort of "making of" doc to go along with the album that's expected sometime this year...

Over on The Jokerstyle Productions Facebook Page, it appears they've been working together since as far back as the latter part of February... Check them out on Facebook... More details are to come! 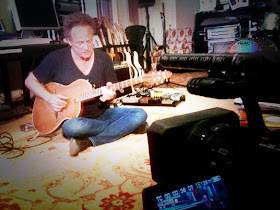