With a combined 75 years of hits between them, there’s no way that a Stevie Nicks/Rod Stewart double bill could possibly disappoint? Well…the two legends of pop/rock took the stage for a show at Boston’s TD Garden and blew my modest expectations away. Both in their sixties, and with two completely different styles of performance, each artist was incredibly entertaining.
My expectations were modest for several reasons. One was Nicks’ well-documented history of drug abuse. Another was Rod Stewart’s recent inclination towards the great American songbook. I didn’t want to see the guy sitting on a stool sitting standards. There was also the fact that the opening date of the barely week-old tour had already been cancelled on account of Stewart having the flu.
Continue To The Full Review at PopBlurd
Photos of Rod and Stevie in Boston
can be viewed on the TD Garden FACEBOOK page.
photo credit: Steve Babineau 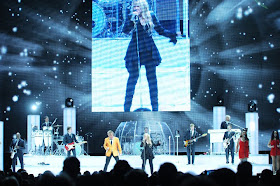