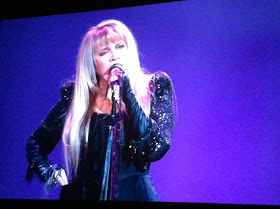 Stevie Nicks opened for Rod Stewart in Tampa tonight... She'll re-appear somewhere during his set to duet with him on one or two tracks... Turns out there were no duets between the two.  That's odd, considering we heard so much from the two of them in the press about the duet possibilities... Well hopefully it's just the case with tonights show.. There's a bunch more shows to go.

The first show got underway tonight with a surprise opener from Stevie...a tune she's played many times live but one she's never opened her show with [nice change].

The setlist, provided with thanks by Alicelover over on the Ledge who had the play by play as the show was going on by someone sending text messages.. As usual the Stevie fans come through with all we want to hear... One surprise of the night aside from Stevie promising to play "Secret Love" which she did, is the infamous "Secret Love" Video (THAT NOBODY HAS SEEN YET) was played on the big backdrop during the song.  It's been reported the song was filmed from the audience, so it's possible that we may get a glimpse of the Video before it officially is released.

I won't list the setlist here, I'll provide a link [here] just in case you want it to be a surprise for your show...

Judging by this photo, she appears to be wearing similar outfits from previous tours, although having not seen a good close up shot, I'm not sure if anything was new.. Apparently the boots weren't back tonight, she wore the platform shoes.  By the sounds of the video footage below she sounded like she was in really good form.

There apparently wasn't an Edge walk at the end of Edge of Seventeen as the stage was set too far back from the audience... Not sure if this will be the case for all shows or if it was just this configuration. 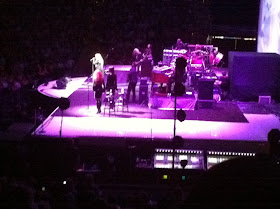 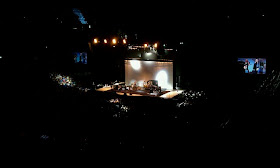