Stevie Nicks says it wasn't her intention to take a decade between solo albums.
Billboard.com

Nicks -- whose "In Your Dreams," the follow-up to 2001's "Trouble in Shangri-La," comes out May 3 -- tells Billboard.com that she was ready to start work on a solo set in 2005 after touring with Fleetwood Mac.
"I was definitely ready to do a record," Nicks recalls, "but the powers that be, the people that surrounded me, pretty much said, 'Don't bother. It's not a good time. The music business is in a terrible place. There's no money, and the Internet piracy is taking over.' 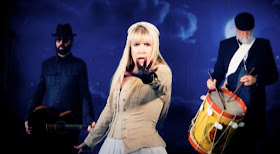 I didn't know what to say, because I'm not a computer person and I don't have a computer and I don't Facebook or whatever. So I just said, 'OK.' If I hadn't been so exhausted from 135 shows I might have bought back on that a little, but I just didn't."
The wait may have been worthwhile, however. Nicks calls making "In Your Dreams" with producer Dave Stewart (along with Glen Ballard) "the best year of my life" and refers to the new album as "my own little 'Rumours.'" The trio recorded the 13-track set at a house Nicks owns in Los Angeles, and though she has mostly written alone in the past, Nicks collaborated with Stewart on seven of "In Your Dreams' " songs.
"We wrote the song 'You May Be the One,' and my eyes instantly opened and I understood why Paul McCartney and John Lennon wrote together -- because they each had something the other didn't have," explains Nicks, who gave Stewart a binder of 40 poems before they started working together. "And with Dave and me, he had thousands of chords and this amazing musical knowledge, and I had thousands of pages of poetry -- and I know six chords. It was like an amazing little meeting of the minds, and I immediately went, 'Well this is just great!' "
Some of the songs on "In Your Dreams" date back a ways in Nicks' life, including the first single, "Secret Love," which she wrote in 1975 about a love affair, and "Moonlight," which she also started in the mid-70s but finished after seeing the "Twilight: New Moon" film in 2009. Other collaborators on the album include guitarist Waddy Watchtel, Mike Campbell of Tom Petty's Heartbreakers and Mick Fleetwood, while Nicks called upon Lindsey Buckingham to perform on and help her finish "Soldiers Angel," which she says "is truly my most sacred and revered song."
Maybe Lindsey and I will go off and rent a
house in Wales and do a Buckingham Nicks album.
"We recorded it live and did some harmonies, and then he did some little lead guitar things and it was perfect," Nicks says. "There's no other players, just me and him. Not only did we create something that's probably as Buckingham Nicks as we have been since 1973, but... I think that song really brought Lindsey and I back together. He said to me as he was leaving on that second day, 'I feel like we're closer than we've been in 30 years.' It certainly opens a lot of doors."

When she'll go through them remains to be seen, however. She and Stewart filmed the "In Your Dreams" sessions; the footage appears in the "Secret Love" video and will be used in other ways down the line, and Nicks hopes "to go all over the world with this record." She adds that touring with Rod Stewart, as she did earlier this year, "might end up being done again because it did go very well."
And Nicks predicts Fleetwood Mac isn't done, though the group will have to wait for her and "In Your Dreams" as well as Buckingham and his forthcoming album "Seeds We Sow," which is due in September and which Nicks says is "really my favorite thing he's ever done -- and I wish he had saved all these amazing songs for Fleetwood Mac."
"When ('In Your Dreams') runs out of gas, as all records eventually do, then possibly Fleetwood Mac will regroup and do another thing -- whether it's a record or a tour, I don't know," Nicks says. "Or maybe Lindsey and I will go off and rent a house in Wales and do a Buckingham Nicks album. I have no idea, but I do know the music will continue."
Nickslive at Wednesday, April 27, 2011
Share