Taku Hirano to Re-join Stevie Nicks in May... One Night Only 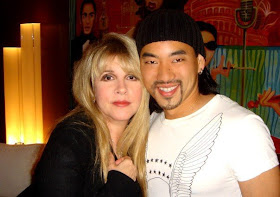 I'm not sure what Stevie's band configuration is beyond the end of Heart and Soul, I assumed there wouldn't be any changes to the line-up - but it appears for one show at least Percussionist Taku Hirano is back in the band!
Taku Tweeted yesterday that he'll be re-joining his Stevie Nicks family for one show while he's between tours.  Taku will play the May 11th Albuquerue, NM show at the Sandia Casino Amphitheatre.

So Lenny either has other commitments, or it's two percussionists that night...
Taku has toured extensively with Fleetwood Mac as well as Stevie and Lindsey on their solo tours stretching back to Say You Will in 2003.