Lindsey Buckingham... FINALLY on SNL... Persistence Does Pay Off 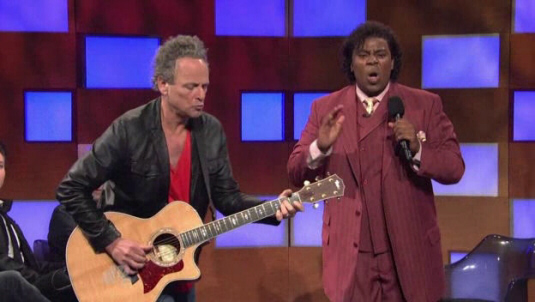 No only did Lindsey finally show up on Saturday Night Live tonight during the skit 'What Up With That' but he played a little bit of "Big Love"... During the segment Bill Hader began as usual sitting at the end of the panel silent of course, never getting the chance to speak... Bill Hader has been portraying Lindsey sitting in along with two other guests who are the real deal during the Keenan Thompson singfest since the 2009 season. Tonight Paul Simon was the musical guest along with a cast member of GLEE and spoke briefly about his album and made mention of the fact that Lindsey never gets to speak... Shortly there after Keenan Thompson, says something along the lines that he didn't know there were two Lindsey Buckinghams... Then out pops Lindsey strolling on stage, guitar in hand...and plays "Big Love" (no singing). At the end, the real Lindsey Buckingham DOES end up speaking and the Bill Hader version of him still remains silent.
Great stuff!.. Lindsey looked good. Bill and Lindsey were dressed identical in what Lindsey typically wore during the 2009 Unleashed Tour - red shirt, jeans and black leather.
Whether this was a calculated move on the part of SNL to get Lindsey to appear or not, I have no idea.  Bill playing LB is so random during this odd segment, that maybe that's the punch line.. If it was calculated, their persistence payed off!  All in all it was great to see Lindsey FINALLY appear... Hopefully he'll get invited back next fall when his album "Seeds We Sow" is released in September.

Also, during the first airing on the east coast... Lindsey was trending on Twitter which I don't believe has ever happened!