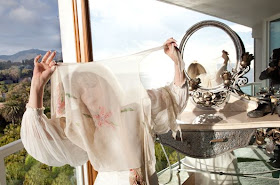 Many critics and fans are calling Stevie Nicks’ new album the best of her solo career.
VOANews.com

Listen: Morningstar report on Stevie Nicks' "In Your Dreams" MP3


The title track of Stevie Nicks’ new album, In Your Dreams, is one of seven songs she wrote with the Eurythmics’ Dave Stewart, who also co-produced the collection. The pair spent the past year recording the album at Stevie’s California home. Other collaborators include Mike Campbell of Tom Petty’s band The Heartbreakers, Stevie’s former bandmate Lindsey Buckingham, and Fleetwood Mac drummer Mick Fleetwood. Stevie refers to the making of “In Your Dreams” as the highlight of her entire career.
“I can honestly tell you, the very best year of my life," Stevie says. "It shuts down anything else that has ever happened to me. It was so much fun and so grand and so soul-fulfilling that when it was over and we started taking the studio down in December and all the people that had lived in the house that year started taking their stuff, it was horrifying. I almost just sat on the stairs and cried because I was so sad that it was over.”
The song “Annabel Lee”, found on Stevie's new album, is an adaptation of an 1849 poem written by Edgar Allan Poe. Other songs on In Your Dreams were inspired by personal events in Stevie’s life. Two date back to poems the singer wrote in the mid-1970s.
In 2004, Stevie began visiting wounded military personnel at Washington, D.C.’s Walter Reed Army Medical Center and the Bethesda Naval Hospital. She helps lift their spirits by giving each soldier a portable media player filled with her favorite music. Included on her new album is a song called “Soldier’s Angel,” which holds special meaning to her and those she has met in the hospitals.
“It was a poem that was written in 2005 and since I have given this poem out to many many families, many many soldiers. And, I always told them, ‘This will be a song one day.’ So, I think this is my most revered song of all time,” she explains.
Stevie recently wrapped up a co-headlining tour with rock legend Rod Stewart. She hints that her future plans include the possibility of a new Fleetwood Mac album and tour that could happen as early as 2012.
Nickslive at Tuesday, May 31, 2011
Share