Stevie Nicks 'In Your Dreams': A Triumphant Return for the Queen of Rock & Roll 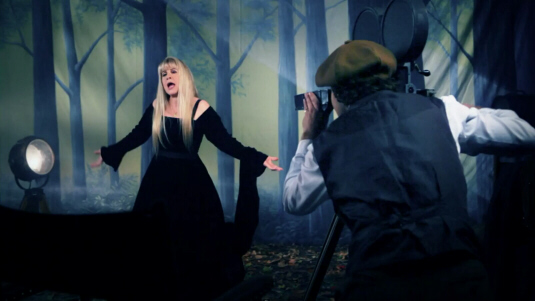 Stevie Nicks is back
Associated Content
by: Mike Sarzo
Anyone who has followed her ever since her commercially successful 2001 album Trouble in Shangri-la knows that Nicks has seldom been far from the road. After spending the bulk of 2002 in the studio with Fleetwood Mac to record their last CD Say You Will, she and the Mac toured in 2003 and 2004 to support that album. One year later, she and Don Henley toured, then she continued the tour on her own. She toured solo again in 2007 and 2008, then toured with Fleetwood Mac in 2009. She even threw in a few shows in an August respite from recording.
Now, Nicks is back with In Your Dreams, her first studio album since Trouble in Shangri-la. That previous record saw Nicks debut at No. 5, which was the highest chart position for a Stevie Nicks solo disc since 1983's The Wild Heart, which featured one of her best-known songs, "Stand Back."
The new CD features Nicks's voice in top shape. She uses that instrument to great effect with some of the most passionate singing she's had in a very long time. She sings "Secret Love", the first single, and a song that just missed the cut on Rumour in a comfortable alto that keeps Nicks from scraping into male range.

The title track features inspired vocals and lyrics, including the confidently sung chorus: "I'm just at the other end of your night/I'm always in and out of your life/Right down the middle of all your dreams/In your dreams" brings back to mind of of Nicks's best lyrics. The bridge features some of her most optimistic lyrics in years: "Are all those tears necessary/For all that pain that you carry/You just send those tears away/Come in out of the darkness/It's a beautiful day." Instead of having the subject of the vocal advice simply dry or wipe the tears away, figuratively treating the symptoms of a malady, she's telling him or her to banish the pain at its source.
She collaborated with Dave Stewart, who was best known as the other half of The Eurythmics. He co-produced the CD with veteran producer Glen Ballard. Nicks described the year she and Stewart worked together, co-writing and having Stewart take several poems and turn them into songs, as the best year of her life, and it shows in the new material.
A previous description of In Your Dreams, even without hearing a majority of the songs was that disc may be "[Trouble in Shangri-la on steroids]." Like Trouble in Shangri-la, the CD sees Lindsey Buckingham make an appearance. Instead of adding additional guitar the way he did on the song "I Miss You", Buckingham plays guitar and sings harmonies with Nicks on "Soldier's Angel", which was inspired by her trips to Walter Reed Army Medical Center to visit wounded American soldiers from the U.S. wars in the Middle East. The song even features Nicks taking a stab at political commentary, describing the divide between left and right as "a war of words between worlds ... about what is wrong, 'bout what is righteous."
She also writes a hopeful tribute to New Orleans during which she describes Hurricane Katrina as "a perfect storm" in "The City of Dreams."
One thing Nicks is well known among her fans for is self referential lyrics, tying in lyrics from earlier songs to her newest songs. "Come in out of the the darkness" from "In Your Dreams" recalls the first title track she wrote, "Bella Donna." She also refers to the more obscure "Battle Of The Dragon" in "Soldier's Angel" by repeating the line "no one walks away from this battle." In the second hard rocker on the CD, "Ghosts Are Gone", Nicks refers to "a ghost through a fog", which appears in "Angel" off Fleetwood Mac's 1979 double album Tusk and in "Sweet Girl" off their 1997 comeback CD The Dance. It's a device that can be tiresome in some of her weaker material, but in her strongest songs, it ties themes together nicely.
Even if the CD doesn't bring Nicks back to the top of the charts or any Grammy nominations, the CD is already a success in one regard: It is a strong collection of songs that showcase Nicks at her best, and it shows that even though she's on the edge of 63, she still has the qualities that shot her to superstardom in the 1970s.
Nickslive at Friday, May 13, 2011
Share