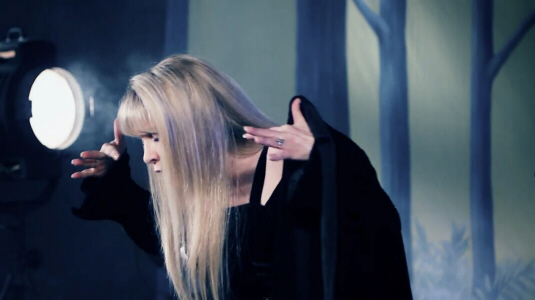 Inside Music: Interview
By Melinda Newman
Special to MSN Music


Few women in rock inspire as hypnotically devoted a following as Stevie Nicks. For more than 35 years, through both her days with Fleetwood Mac and her solo career, she's mesmerized fans with her gravelly velvet voice and her bewitching songs and her ability to twirl.
Ten years after her last solo album, "Trouble in Shangri-La," she returns May 3 with "In Your Dreams," recorded largely in her Los Angeles living room and produced primarily by Dave Stewart and Glen Ballard. Both Fleetwood Mac's Mick Fleetwood and Lindsey Buckingham play on the compelling set. And as MSN Music found, once someone is in Nicks' life, he or she seldom leaves.
MSN Music: You just came off the road with Rod Stewart in the Heart & Soul tour. Do you have a ritual for celebrating the end of a tour?
Stevie Nicks: No, not really. Everybody was starting to get sick. It was a lot of shows. The last night of the tour, Rod just had a new baby, his eighth, a little boy, so I bought him a little blue diamond shoe, little baby shoe, and then engraved it with Aiden's initials and my initials and the date and gave it to him and told him how much I had enjoyed it. [The tour] ended up to be a really great thing. I wouldn't be surprised if it happened again, because it went very smoothly.
You told a Santa Barbara newspaper that you thought "In Your Dreams" would go down as your greatest work.

I think it's going to be my own personal little "Rumours." I'm more proud of this than "Bella Donna." I'm more proud of this than anything, really. I'm not saying that this record is better than those records. What I am saying is the magical mystery tour of making this record was so far superior in the fun that we had. Everyone sat down and ate dinner for an hour and a half [every night] and talked politics and the world. It was like being French in the 1920s and sitting down with Man Ray and Coco Chanel.
Since you were making this in your home, it sounds like it was created in this incredibly nurturing cocoon. What did Dave Stewart, best known as half of Eurythmics, bring to the equation?
As a producer and as this amazing guitar player and as an amazing songwriter, he came into this situation with no ego. He could read me very well. We wrote seven songs together, which I've never done with anyone. So that right there made me understand why John Lennon and Paul McCartney wrote together or why the great songwriting teams wrote together, when they could write very well by themselves.
I sent him a binder with 40 pages of typewritten poetry and I never really expected him to read it, but he did. So when he came to my house ... he took a poem out of the binder and handed it to me [and said] "I like this poem." He starts playing his guitar and he gives me the hand wave, like "let's go," so I start reciting my poem in a sing-songy kind of way and in five minutes we'd written this song. ... In all the years I've spent with other writers, that has never happened, ever, and I've been writing since I was 15-and-a-half.
It sounds like this album just poured out of you. Is there anything that gives you as much joy as singing?
It's the writing mostly. I love to get on the stage and sing. But most important for me is the writing. Nothing makes me happier than just writing.
The first single, "Secret Love," is about a clandestine love affair. You've said you wrote it in the '70s but you don't remember who it's about. Do you want to make someone up for me?
I really don't remember. I wrote it and I put it in a box and I put it away in Phoenix. ... It was always a song that I didn't want anybody to know about because whatever it was about, it was a secret. And I don't want to guess who it was about because I don't want somebody calling me out of the blue saying, "I can't believe you told the world this song is about me because it wasn't about me."... The only way I can look at it is in a very romantic way. At the end of 1975, we were crazy and young and beautiful and moving very fast, and love was everywhere, and gorgeous men were everywhere, and Lindsey [Buckingham] and I were broken up, and it was like we were meeting people like crazy, and so I just don't know. I think that makes the song even more fascinating, because we don't really know who it's about.
Right after that song on the album comes "For What It's Worth," which you wrote with Tom Petty & the Heartbreakers' Mike Campbell. It's also about a clandestine affair.
Well, that was not so much a clandestine affair. That was somebody who came into my life at a time when I was having a very hard time. Just like sometimes angels step into your life, this person stepped into my life and kept my head above water. It was a lifesaving moment. I wrote that song in May in Hawaii in 2010. 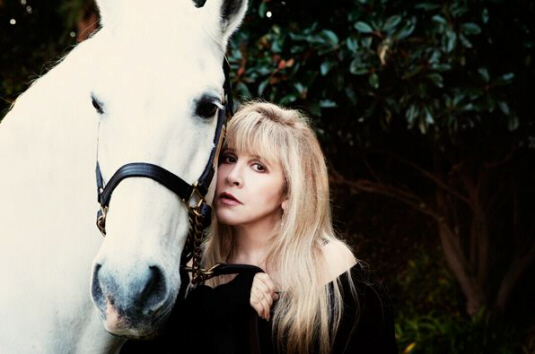 But you're not going to say who that one's about even though you can remember?
No.
Both Dave Stewart and Mick Fleetwood appear in the video for "Secret Love." You and Mick have been friends for almost 40 years. What does it mean to have him in your life for so long?
My best friend, Sara, fell in love with Mick when I was going with Mick, which was a rough relationship because he had just told Lindsey about it, and about three weeks later, he fell in love with Sara. I found out that Sara had moved in to [Mick's] house that day from her husband, and so I not only lost Mick, I lost her. So I pretty much freaked out on that one, needless to say. We were recording "Tusk" and we had to go back to work the next day. I got over that fairly quickly and actually forgave Sara. I figured that relationship between me and Mick was never going to work anyway. Mick and I just became amazing friends after that. He married Sara, so it worked out [Editor's note: Fleetwood and Sara divorced in 1992]. All these years later, I go to Maui where Mick lives. He has two little twins [with current wife Lynn], who are my fairy goddaughters. It's like we go on vacation with them. That's how good friends we are. We go there, we watch the Grammys, we all do the ballots and we vote. All of us hang out on the couch like we are brothers and sisters. Most women will tell me they are really not such good friends with most of their past boyfriends and I am.
What do you attribute that to?
Maybe because in the long run I really didn't want to be married and I really made a choice to be an artist and follow my artistic muse wherever it may take me. I really didn't want to be answering to somebody about why I was going to Paris the day after tomorrow. ... It's very hard to be a man and go out with somebody like me or Sheryl Crow or we women in this business ... so I kind of took the other road, and I think maybe that is why I remain friends with [them], because in the long run I didn't want to be with them forever anyway.