Stevie Nicks sat down at a piano in an Australian hotel and declared: “I’m ready to make a record now.”


She sat down at a piano in an Australian hotel and declared: “I’m ready to make a record now.”


“I really don’t care if anybody buys it, and I really don’t care if everybody steals it,” she says during an interview at her Pacific Palisades home. “What I need is to make a record for me, the artist. I need to create something now. So I am going to close my eyes to the music business and its problems, and go forth with a good heart and great belief and make a record.”
The result, “In Your Dreams,” was released this week.
The album features a song Nicks wrote in 1975, right after joining Fleetwood Mac. She never shared it with the band, “which is crazy because this is a very easy, simple, precise song that Lindsey Buckingham would’ve loved, and Fleetwood Mac would’ve loved,” she says. “ I put it away right after I joined the band, and for some reason, I never put it on any of my records either.”
Last year, she remembered the track that she’d stuffed into a box in her parents’ Phoenix home: “Something in my head, I saw the cassette in my head with the little ink that said, ‘Secret Love.’”It’s the first single from “In Your Dreams.”
Another song on the album was co-written with Eurythmics guitarist Dave Stewart (also a producer of the album) and titled by Reese Witherspoon.
The actress offered her Nashville home to Nicks and Stewart for a brief stay, noting that nothing is “cheaper than free.”
“Cheaper Than Free” is the album’s closing track. Sharing the writing process was new for Nicks, and also a happy surprise.
“ I really had that light, epiphany, where I realized why people wrote together,” says the 62-year-old, who previously considered songwriting a solo pursuit. “I suddenly understood why (John) Lennon and ( Paul) McCartney wrote together. I understood why other famous songwriting teams wrote together, because they each had something that the other person didn’t have. For Dave ( Stewart) and I, I have books of poetry and he has thousands of chords.” 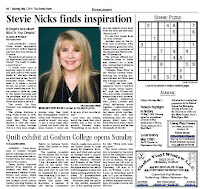