Retire? No, I’ll still be rocking when I’m 70: Stevie Nicks on why Fleetwood Mac are back for good (UK Interview)

Stevie Nicks is in a hurry.
By ADRIAN THRILLS
Dailymail.co.uk

One of the world’s great front-women — and the face of Fleetwood Mac since joining with then boyfriend Lindsey Buckingham back in 1975 — she is in London to promote a new solo album and appear with Rod Stewart in Hyde Park.
And, as she juggles her solo career with the ongoing resurrection of Fleetwood Mac, the Arizona-born singer, 63, knows time is of the essence.
'Once you turn 60, you can’t hang around,'she says.  'When we finished the Fleetwood Mac Unleashed Tour in 2009, I told the band I was going to make a solo record. I wanted to do it as quickly as I could — it took a year — and then go back to them
'I’m not sure whether we’ll tour or make a new album, but we'll do something.
'In ten years, we’ll all be over 70. We might not feel like an 83-date tour then, so we’ve got to act quickly.'
Bedecked in her trademark jewels and a flowing black dress, Nicks is on fine form. Talking about her new album, In Your Dreams, she regularly bursts into song. Her voice, instantly recognisable, is still striking. Here is one singer in no need of auto-tune.
The record itself, her first solo effort in a decade, is well-crafted and melodic.
Recorded in her Los Angeles home, it was produced by Dave Stewart, of Eurythmics, and Glen Ballard, who co-wrote Alanis Morissette’s Jagged Little Pill.
Veering between guitar-driven rock and beautiful, contemplative balladry, it features her most inspired songwriting since the golden years of Fleetwood Mac, when she penned hits such as Rhiannon, Landslide and Dreams.
Already a top-ten album in her homeland, it is released here in ten days'time, and Stevie is keen to spread the word. 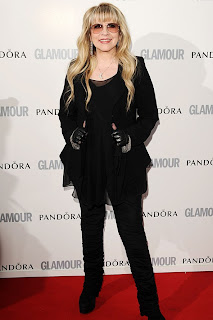 Having flown into the UK for the Glamour Awards, she is staying in London until her Hard Rock Calling gig with Rod Stewart on June 26.
'After my last album, people told me I shouldn't bother making another one,' she says.
'They said internet pirates would steal it online and hurt my feelings. But that doesn't mean you shouldn't try.
'I’m not doing this because I need the money. But, if I can still do it, it makes it easier for the other little girls.'
In Your Dreams features a cameo from Nicks's former beau and life-long muse Buckingham (now married with three children), plus contributions from drummer Mick Fleetwood (with whom she had a two-year fling in the aftermath of 1977's turbulent Rumours album). 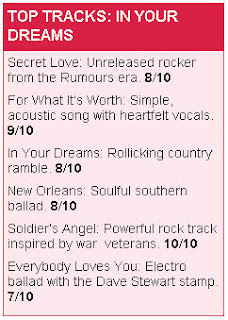 Despite the romantic upheaval that has dotted her career, she says Fleetwood Mac's convoluted emotional history has never impaired their ability to make music.
'My relationship with Lindsey is pretty much the pivotal one in my life,' she admits.  'If he and I had never met, we might still have been successful. But would we have been part of something as amazing as Fleetwood Mac? I doubt it. Meeting him was my destiny.
'It was interesting recording with Dave Stewart. I think he and Annie Lennox have a relationship like Lindsey and mine.
'When you're part of a musical partnership with someone who has been your lover, that baggage is always there. 'It doesn’t matter whether the other person has got married or had children. What matters are the things you experienced together.'
Nicks and Buckingham had been a rock duo before joining Fleetwood Mac.
Rumours sold 40 million and topped the U.S. chart for seven months, but their stardom was ultimately blighted by cocaine-fuelled excess.
'We had to call a halt and get better before we could continue,' Stevie says. 'A lot of our peers burnt out and never made it back. We took a break.'
For Nicks, though, worse was to come.
Having given up cocaine in 1986, she developed an eight-year addiction to the prescription tranquilliser Klonopin, recovering only after a harrowing spell in rehab.
The stand-out moment on In Your Dreams — and the only track on which Buckingham appears — is the powerful Soldier’s Angel, inspired partly by Nicks’s work in the rehabilitation of U.S. servicemen and women injured in Iraq and Afghanistan.
Since 2004, she has been a regular visitor to the Walter Reed Army Medical Center in Washington, donating hundreds of iPods to wounded troops.
'It’s my most sacred song,' she says. 'I wrote it at the piano and tried to record it with Dave, but it lost all its brutality. 'I knew I had to get Lindsey in, so I sent him the demo and he told me he thought the song was wonderful. He came to my house and we cut it live in two days.'
Nicks is looking forward to Hyde Park, where she will play an hour-long set before joining Stewart.
'I don’t like opening for many acts, but I'm happy to open for Rod,' she says. 'He’s exactly the same as in the Seventies. He's still a real dandy.'
After that, it's back to the Mac.
'We’d only disband the group if we hated each other. We still have fights — that's the way it is — but something always clicks when we get together.
'At the moment, I can’t stop. If I ever feel I’m doing things that are age-inappropriate, I might reconsider.
'But female opera singers work into their 70s. Why not a rock singer?'
• In Your Dreams is out on June 27. Stevie Nicks plays Hard Rock Calling in London on June 26 (ticketmaster.co.uk).
Nickslive at Thursday, June 16, 2011
Share