(Reviews) Stevie Nicks 'In Your Dreams' 'Soldier's Angel' is the most powerful musical tribute to servicemen to be recorded in years. 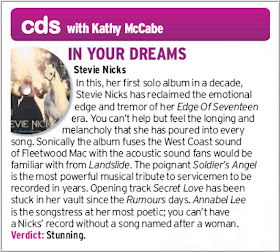 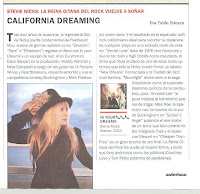 TRANSLATION: After ten years of absence, the legendary Stevie Nicks (Fleetwood Mac fundamental part, author of radio gems like "Dreams," "Sara" or "Rihannon") returns to disc with In Your Dreams and a deluxe kit: the former Eurythmics Dave Stewart in the production, Waddy Wachtel and by Mike Campbell on guitars (X Pensive Winos and Heartbreakers, respectively) and his former teammates Lindsey Buckingham and Mick Fleetwood, and others. And the result is as expected: soft rock ideal for touring the California coast from any beach on a sunny summer afternoon. "Secret Love" dating from 1976 (Rumours era) and it sounds so good and high fidelity as the plaque, the subject title of the album is one of those rocks up tempo that only the Knicks can sign, the ballad "New Orleans" honors Jazz City post-Katrina, "Moonlight" refers both to the Twilight saga as to overcome insomnia chemical singer for "Annabel Lee" puts music to the eponymous poem by Edgar Allan Poe, almost ghostly appearance of the voice of Buckingham in "Soldier's Angel" Arab air power an issue that could have made Tusk and the duet with Stewart in "Cheaper Than Free" is a great final flourish. Gypsy Queen of Rock is back in good shape, and both his fans and audiences anonymous (Courtney Love and Tom Petty) we compliments.
Nickslive at Tuesday, June 14, 2011
Share