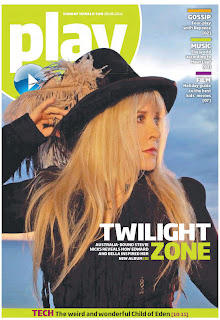 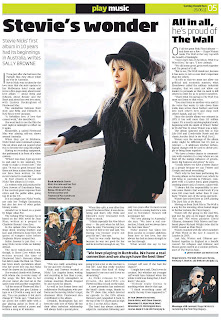 THE Twilight film New Moon has had a profound effect on rock superstar Stevie Nicks.
IT WAS just after she had seen the Twilight film New Moon while on tour in Australia. Stevie Nicks was so taken by the fated love story that she stole upstairs to her Melbourne hotel room and wrote a five-page essay about iconic love affairs.
She wrote about Bella and Edward, about Beauty and the Beast and about her own love story, between herself and her musical partner in life, Lindsey Buckingham, of Fleetwood Mac.
The similarities between their story and Bella and Edward's in New Moon were uncanny. A forbidden love. A love that cannot work, she describes it.
She went back to see the film to reflect on it again.
Meanwhile, a united Fleetwood Mac were playing sell-out shows around Australia. When they got to Brisbane, her hotel room contained a piano.

Nicks sat down at the piano, the love story of Bella and Edward fresh in her mind, its metaphors and messages still relevant, and out poured a collection of notes and words that were to become the song Moonlight.
Having no recording equipment, she recorded the song on video camera. "When I was done, I got up, went in and said to my assistant `I'm ready to make a record now'," Nicks says. "It was so great because had there not been a piano there, it may not have been written."
That was the beginnings of In Your Dreams, Stevie Nicks's first record in 10 years. The record has received great response from critics and the public alike, becoming a top 10 album in the US.
Today, Nicks is chatting on the phone from her home in Los Angeles. She's in good spirits because just last night she celebrated her 63rd birthday at a special showcase gig in Los Angeles.
She was joined on stage by Buckingham, who plays on the record, Dave Stewart of Eurythmics fame, her co-songwriter and producer of the record, and fellow songwriter Mike Campbell of Tom Petty's Heartbreakers.
The crowd ended up singing Happy Birthday to her. "Not the best singers in the world, but they put their heart into it," she says. It's a fantastic next chapter for the famous gypsy queen, who has managed to retain her status as an icon of romantic rock.
The record gives an insight into Stevie Nicks's world, not only her Twilight fascination but also her love of other gothic literary works.
Annabel Lee is based on a poem by Edgar Allan Poe. The rockin' Wide Sargasso Sea is based on the 1966 novel by Jean Rhys as a prequel to Jane Eyre. In the upbeat song New Orleans, she sings about wearing feathers and lace, and references Anne Rice, the queen of vampire tales before Stephenie Meyer usurped her throne.
Italian Summer is just that - a song she wrote while on holiday abroad. Her most talked about song, though, is Secret Love, which was written around the time of the Rumours album, but didn't make the final cut. There has been much speculation about who her secret love is, but Nicks won't be drawn on his identity.
For this record, she worked closely with Stewart.nte "All the years of Fleetwood Mac, I would basically just give Lindsey a tape or a CD with a song on it and say you can produce it but don't change it," says Nicks. "I had never sat across the coffee table with a guy playing guitar in front of a fireplace and recited a poem and written a song in 10 minutes. This was really something new for me, and very exciting."
As well as Buckingham, drummer Mick Fleetwood also contributed to the album. "He (Buckingham) came and played on my song Soldier's Angel, and he really saved the day on that one," Nicks says. "And I think that really is a super tie between us because I think that song's going to last forever."
Source: Herald Sun | The Telegraph | Adelaide Now
Nickslive at Saturday, June 25, 2011
Share