Singer/songwriter Stevie Nicks was feeling down before her recent interview with SoundSpike. She'd just bid adieu to her Chinese Crested Yorkie before heading off to England to do press and perform another show with Rod Stewart.
"[The dog is] on her way to Phoenix as we speak," Nicks said via telephone from her California home. "Much to my heartache, she can't go to England. She's staying with [a friend's] mom and dad. You can't take [dogs] into England. We're going to be gone for almost a month. It's been a horrific day of saying goodbye to her. ...It's just so lonely. It's so quiet around here."
Nicks is touring in support of her latest solo effort, "In Your Dreams," a collaboration with Dave Stewart of Eurythmics fame. Prior to her visit to England, the Fleetwood Mac singer had to briefly put promotional efforts on hold, including a stop on "The Today Show," as she recovered from pneumonia.
Now that she's feeling better, Nicks is ready to promote her album, which features the single "Secret Love." She spoke to SoundSpike about her illness, working with Stewart and if there's another Fleetwood Mac reunion in the offing.
SoundSpike: So are you feeling better?
Stevie Nicks: You know what, I'm over the pneumonia, but I've definitely still got the residue of being that sick for three weeks. I was really sick. Having really bad pneumonia on the day your record comes out -- your favorite record you've ever made in your life -- really sucked. And having to cancel "The Today Show" in New York really sucked. I mean, that part of me was going, "Why are you doing this to me, God?" My mom said to me, "You know what? There's a reason. There's a reason. Maybe it's because you never take a break. Maybe the spirits were saying, 'You need a break.' So if we have to give you pneumonia and knock you down for a couple weeks, you're down." It was a hard three weeks. 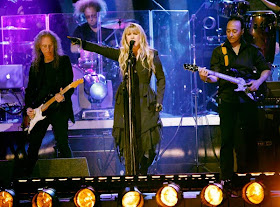 Were you still ill when you performed on "Dancing with the Stars" [on May 17]?
I was still a little sick on "Dancing with the Stars."
You sounded great.
Thank you. I have been sicker than that and done concerts. That was on the end of the pneumonia. But had I had to do a bunch of songs, then it would have been a problem. Singing one song, not so hard.
Do you have plans to tour North America again soon?
I do, like more toward the end of the summer when it's even hotter. Then we're off to Australia in November. We'll do probably two months here. When you release a new record, you never really know what's coming. I would hope and love to do a few shows in Europe. I don't know whether that'll happen or not. We're leaving tomorrow to do press in Europe and to do one big, huge show in [London's] Hyde Park, 55,000 people on the 26th of June. That's exciting. My band hasn't played that big of a show since like I don't know, Peace Sunday. That's a lot of people.
You said this is your favorite record.
This is my favorite record, absolutely.
Full Q&A at Soundspike.com