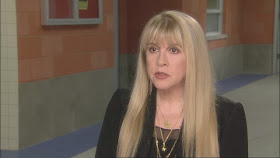 The 2011 official Glee tour ended a couple of weeks ago, and with The Glee Project underwhelming, what’s a Gleek to do? With only 5 of 22 episodes from Season 2 available online, it seems like your best option is to wait for the Glee Season 2 DVD and Blu-ray release, which will street on September 13th.
I know it’s a while to wait, but those who are patient are likely to be happy with all of the extras coming with the Fox Home Entertainment set. Several featurettes will come with the episodes, including “Getting Waxed With Jane Lynch,” “Stevie Nicks Goes Glee,” “Shooting Glee in New York City,” two segments about Brittany, and a portrayal of the Glee experience at Comic Con 2010. Other extras will include “The Making of The Rocky Horror Glee Show,” “Santana’s Slams,” “Sue’s Quips,” an exclusive bonus song, a set-building extra, and the Glee Music Jukebox. Though it looks like Fox put a lot of attention into its special features, most of these are a rehashing of Glee: Season 2, Volume 1.
Television Blend
Nickslive at Monday, July 04, 2011
Share