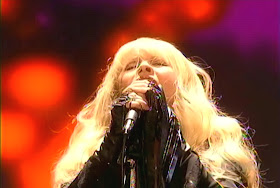 Stevie Nicks is best known for her work with Fleetwood Mac.


She has also had quite a solo career as well. This year saw her touring with Rod Stewart and marked the release of a new Stevie Nicks album. The title of the album is “In Your Dreams” and features thirteen tracks.

Nicks’ back-up musicians include Waddy Wachtel on guitar, Dave Stewart guitar, and Mike Campbell (from Tom Petty’s band) guitar and bass. What helps this album the most is the producers. It is co-produced by Glen Ballard and Dave Stewart of the Eurythmics.

Ballard is well known in the business for his songwriting and producing talents. He has worked with many major artists including Alanis Morissette and Aerosmith.

However, Stewart’s influence is felt much more than Ballard’s. For example, he co-wrote seven of the songs on the album.

The first song on the album and first single “Secret Love” has Stewart’s stamp as it starts and ends as if in the middle. “Ghosts Are Gone” has a Eurhythmics feel to it. It also is a very energetic Rocker.

“In Your Dreams” also has the energy that Stewart brings to his work.