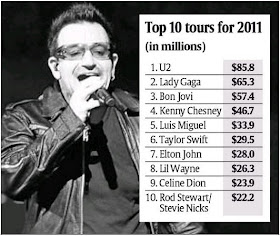 
Ticket sales for concerts are up even though prices are higher With acts like U2, Kenny Chesney, Bon Jovi and Lady Gaga leading the way, the concert touring business is enjoying a healthy comeback this year after struggling in 2010.

Pollstar editor Gary Bongiovanni says artists and promoters have helped the upturn by taking a more conservative approach in terms of venue size, frequency of return to certain markets and number of markets played. He says the higher prices weren’t expected coming off a year with lower grosses and ticket sales. But many of this year’s shows offer audiences good value for their dollars.

" What’s happening is that some artists are combining with a stronger support act, almost a co-bill situation,” Bongiovanni says, pointing to package tours such as Rod Stewart and Stevie Nicks, New Kids on the Block and Backstreet Boys, and George Strait, Reba McEntire and Lee Ann Womack.