“I’m doing a fair number of songs just on my own,” he explains, “but most of these songs are ensemble, and they need a band. I thought it would be more interesting, certainly, to do new songs that are as close to the recorded versions as we care to get, so we’ve done that. Of course, you don’t really get away without doing a few other things, too, that people might want to hear, so you try to mix it up. But we’re doing about eight or nine new songs.” 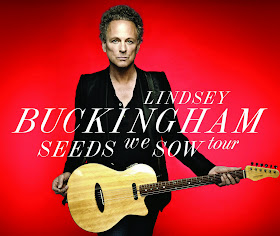 
Lindsey Buckingham occupies one of the odder positions in the already off-kilter business that is the modern-day music industry. Though Buckingham is the co-leader and driving force behind one of the bedrock bands of the classic-rock universe, the Fleetwood Mac singer/songwriter/guitarist’s long-standing, if sporadic, solo career is considerably more of a boutique operation. This is especially true with the arrival of his latest solo outing, Seeds We Sow, Buckingham’s first-ever release outside the major-label realm. Buckingham had been working under the Warner/Reprise umbrella ever since his band’s self-titled 1975 blockbuster album, but after his contract ran out following his last solo outing, he found the majors to be both uninspired and uninspiring in regard to his new work. “As we all know,” he says, “the model of the large record company, you might say it’s broken. But you might just say it’s insensitive to the sense of possibility, the sense of risk-taking, the sense of nurturing that it used to provide artists.” Consequently, he’s gone the indie route with Seeds.