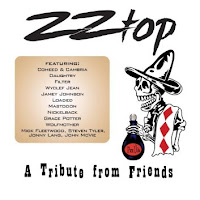 October 11th is the official release date of ZZ Top A Tribute From Friends. This eleven track compilation draws together newly-recorded versions of ZZ Top classics, interpreted by a range of artists. The album leads off with “Sharp Dressed Man,” which is credited to The M.O.B., a group that features Mick Fleetwood, Steven Tyler, Jonny Lang and John McVie.

Upon learning of the album, Billy Gibbons, Dusty Hill and Frank Beard, responded via statement: “When we were told there was going to be a ZZ Top tribute album a while ago and logically asked, ‘Who are we paying tribute to?’ Then we found out that a bunch of great artists were paying tribute to us and we were in disbelief. For the past 40 or so years, all we’ve done is get out there and crank it and try to have a good time while doing so. To a great extent, we’ve succeeded since we’re still having a good time so that would be reward enough for ‘the same three guys playing the same three chords.’ Now comes A Tribute From Friends and we’re so delighted that our music resonates with these great musicians whom we so admire.”

Fleetwood admits he was thrilled to be asked to be a part of the tribute: "We’re delighted to honour ZZ Top this way. Their legacy, like that of the original Fleetwood Mac, is steeped in the blues we all love so much. I know that Steven and Jonny feel as strongly about their legacy as John and I do."

Mick and John's inclusion on this album was initially reported back in January, 2011 HERE.

The album is available for pre-order on Amazon
Nickslive at Tuesday, August 23, 2011
Share